Frank Capra’s “It’s a Wonderful Life” is an annual television tradition on Thanksgiving.

You can also see it as a stage musical at Toby’s Dinner Theatre through Jan. 15.

“I remember growing up with the movie with Jimmy Stewart, and it wasn’t Christmas until you had watched ‘It’s a Wonderful Life,'” said Susan Thornton, who plays Mrs. Hatch. “That’s why I’m so grateful that the stars aligned that I was able to be in the first production that Toby did in her original adaptation that captures the heartwarming love of that movie.”

In 1989, Toby Orenstein adapted the film into a musical by David Nehls (music and lyrics) and Michael Tilford (book) two years before a different version hit Arena Stage in 1991.

“This one to me captures the true heart of the movie,” Thornton said. “The last time we did it was in 2015, and there were a lot of people in the audience who said they’d never seen the movie, but golly, at intermission they were so invested in the story and the characters.”

Set in the sleepy town of Bedford Falls from 1928 to 1945, loving family man George Bailey reaches the end of his rope amid financial ruin and possible imprisonment to contemplate suicide on Christmas Eve. He’s saved by divine intervention in the form of the angel Clarence, who shows George what the world would look like had he never been born.

“It shows how his life, which is the greatest gift of all, affected and touched so many other people,” Thornton said. “People don’t realize that what they do in their life touches and affects so many others. George Bailey gets a chance to see what everybody else’s lives would look like if he hadn’t been born. You realize what a difference one man can make.”

Actor Justin Calhoun is tasked with capturing the aw-shucks nature of George Bailey.

“He’s trying to sing to Zuzu saying, ‘It’s going to be OK,’ when he knows it isn’t,” Calhoun said. Thornton added, “When George is with Zuzu and her rose petal fell off, I’m tearing up just thinking about it. He has this beautiful lullaby that he sings to her. It’s heart-wrenching, then Mary, George’s wife, and Clarence the Angel sing ‘If Only I Could Reach Him.'”

Thankfully, George sees the light, Scrooge-style, culminating with giddy jubilation to shout “Merry Christmas” through the streets of Bedford Falls. The snowy town is recreated with a minimalistic set and emphasis on lighting and period props from the 1920s to 1940s.

“Toby’s is in the round, so the audience surrounds the stage,” Calhoun said. “There’s a bridge set and there’s an elevator. It’s just amazing what they’ve done with this rather small space, and yet they transform it every show to a whole different thing.”

Of course, it’s also a dinner theater, so bring your appetite.

“This is your traditional holiday comfort food,” Thornton said.

That’s right: Every time a bell rings, dinner is served. 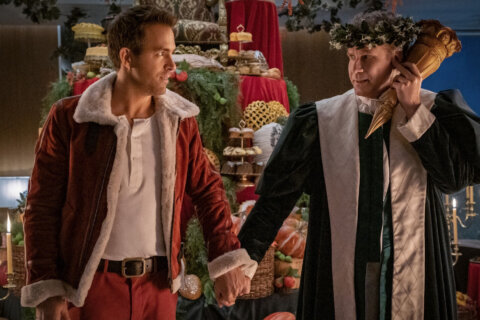