He’s a six-time Pro Bowler who holds the NFL record for the most receptions in a game. He also shares his expertise every week as the co-host of “Inside the NFL” on Showtime.

This Thursday, Brandon Marshall brings NFL alumni to City Winery for “I Am Athlete.”

“You got [LeSean] ‘Shady’ McCoy, myself, [Adam] ‘Pacman’ Jones, Omar Kelly,” Marshall told WTOP. “DJ Clue will have a special live performance … [NBA star Kyle Kuzma], love his fashion, love his game, so it’ll be dope to have him out from The Wizards. We’ll have in the audience some of our Commanders players, Wizards players, it’s gonna be dope.”

They’ll discuss sports 30% of the time, but “70% of what we talk about is culture and life,” Marshall said. “We talk about mental health. We’ve had Deion Sanders on our show talking about his lowest moment when he tried to take his life, Dez Bryant cried on our show, Darrelle Revis talking about PTSD … We go deep. ”

His favorite part is when audience members come to the stage to ask questions, so that’s when you can hear the athletes’ take on the hottest issues in local sports. “That’s when our show gets really juicy,” Marshall said. “They ask about all of the messy stuff from the past, they ask us about Lamar Jackson. They may even ask us about Daniel Snyder.”

Born in Pittsburgh in 1984, Marshall grew up a Steelers fan with Hines Ward as his favorite player. In high school, he moved to Florida as a three-sport athlete with football, basketball and track. He attended the University of Central Florida, where he racked up 1,674 receiving yards and 13 touchdowns. He was drafted by the Denver Broncos in 2006.

“Coach [Mike] Shanahan, he’s tough, but he’s a players’ coach if you come in and handle your business,” Marshall said. “[In Washington], I think RG3 came in, he was a superstar, did a phenomenal job, but there was some immaturity there … Coach Shanahan is one of the biggest alphas in the world. Put them together, there’s gonna be some problems.”

As for the challenging defensive backs he faced, he says, “Al Harris was tough, Charles Woodson was tough, even Quentin Jammer was tough when I first got into the league. But my number one challenge was Darrelle Revis. He was a challenge for all elite wide receivers back then. There was a three, or four-year span where he just locked everything down.”

He says the best wide receivers of his era include “the childish Terrell Owens.”

“Oh my goodness, this dude. I’m beefing with him right now, but I still got to respect his game. Steve Smith was awesome … Larry Fitzgerald, Andre Johnson, Reggie Wayne, Marvin Harrison, Calvin Johnson … That was the era! Chad Ochocinco! Randy Moss!”

As for the greatest receiver of all time, Marshall said “the easy answer is Jerry Rice. Ask me that question at the live show, because I’m gonna rethink that. He played 19 years and he was legendary, but I wanna peel back some layers. Right now, I’ll go with Jerry Rice, but could it be Randy Moss? Could T.O. have a shot there? Or could it be someone else?” 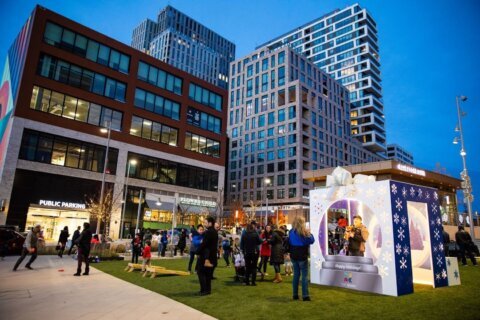