The D.C. Jazz Fest may be over, but the free music continues in Maryland and Virginia!

“It is one of the flagship events of Downtown Silver Spring,” Silver Spring Regional Service Director Jacob Newman told WTOP. “We’re also going to have a beer garden from three of our Silver Spring breweries — Denizens, Astro Lab and Silver Branch.”

The main stage features the funk-jazz band Chopteeth, Paul Carr and the Real Jazz Ambassadors, and Marcus Johnson’s go-go band Crank & Flow. Headlining is trombonist Delfeayo Marsalis, brother of Wynton and Branford Marsalis, who have both played the fest in the past. Delfeayo will bring his 14-piece Uptown Jazz Orchestra, formed in 2008.

The second stage will include international groups, including the Ethiopian band Feedel, the Fran Vielma Quartet from Venezuela, and the Portuguese-French sounds of Loide.

“It’s been a phenomenal festival all along and it’s really evolved,” Rosslyn BID President Mary-Claire Burick told WTOP. “We’re really excited to throw this party this year, particularly coming out of the pandemic. We had jazz fest last year as well, but this year we are back full force. We’re expecting a great turnout. We already have 4,000 RSVPs!”

The lineup includes Mwenso & The Shakes from Harlem, The Delvon Lamarr Organ Trio and Groove Orchestra. The headliner is Cimafunk, who’s been described as “the Cuban James Brown” or “Caribbean Bruno Mars.” The “engaging” and “dynamic” Cimafunk was recently chosen on Rolling Stone magazine’s list of the Best Albums of 2021.

“Each of these artists were chosen for their diversity of expression within the jazz tradition,” Burick said. “These musicians are touring contemporary jazz festivals across the country, offering a great mix of jazz and related musical forms, so think blues, funk, R&B.”

To get you in the spirit for Saturday, you can enjoy the first-ever Rosslyn Rolling Concert on Thursday from 11 a.m. to 2 p.m. where an open-top bus will hit the streets of Rosslyn and beyond as the BroadSound Band performs a mix of jazz and pop hits.

You can also check out the festival’s Spotify playlist:

Listen to our full conversation with the Silver Spring Jazz Festival here.

Listen to the full conversation with the Rosslyn Jazz Festival here. 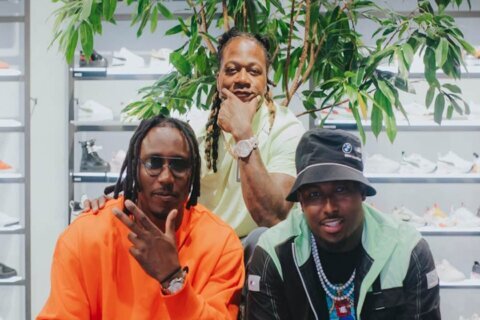