In 1982, Dustin Hoffman starred in Sydney Pollack’s gender-bending comedy flick “Tootsie,” voted one of the top 100 movies of all time by the American Film Institute.

Next week, the 2019 Broadway musical version hits National Theatre from Dec. 7 to 12.

“While we’re still doing the same general story … I didn’t want to get confused, so I actually haven’t seen the movie!” actress Ashley Alexandra told WTOP. “When it’s over, I’m going to be able to sit down and watch it all the way through. My parents love that movie, so I’ve seen bits and clips of it, but I’ve never gotten to see it all the way through.”

Adapted by Robert Horn (book) and David Yazbek (music/lyrics) from a screenplay by Larry Gelbart, Murray Schisgal, Don McGuire and an uncredited Barry Levinson and Elaine May, the story follows a struggling New York City theater actor, Michael Dorsey, who dresses up as a woman, Dorothy Michaels, in order to land a role in a new show.

“We’ve got a very arrogant, self-centered actor named Michael who’s ostracized himself from his community,” Alexandra said. “No one wants to cast him in anything anymore, so to get back to work again, he makes a pretty bad decision, changing everything about himself so that he can get cast into this role, but in our version it’s a musical, not a soap opera.”

The role of Michael — and his alter-ego Dorothy — is played by actor Drew Becker.

“He really gets lost in it all every show, which is just a really wonderful thing to see,” Alexandra said. “It’s just a little bit different every night because it’s so new to him every night, which is really fun. We get along, which is nice.”

Alexandra plays his co-star Julie Nichols, who doesn’t realize Michael is a man.

“Julie is really smart,” Alexandra said. “She’s been through some stuff, but chose the life she wanted and forged ahead with it. She’s a wonderful actress, but she hasn’t been so lucky in work. She keeps winding up with these very annoying directors and not-so-good scripts. … It’s a fun journey to … watch her choose to make a different path for her life.”

The cross-dressing premise was progressive at the time like “Some Like it Hot” (1959) and “Mrs. Doubtfire” (1993), but today’s version pushes the social commentary even further.

“The choice that he makes to dress up as this women is very offensive to all women,” Alexandra said. “In the beginning, he is very much someone who is creating a problem. By the end, you learn how valuable the truth is and how valuable living in the truth is. … You learned, but you didn’t learn everything and you certainly have a lot farther to go.”

Today’s audiences will receive it much differently than movie audiences did in the ’80s.

“We live in a world where we’re aware,” Alexandra said. “I wouldn’t say it’s a different world. I think it’s the same world, but just actively thinking about the person next to us, which is what we should always be doing. The show is digested differently, but we’ve worked really hard to make sure the comments we’re saying are relevant to the times.”

In addition to the deep social themes, it’s also first and foremost a fun musical comedy.

“One of my favorite Michael Dorsey songs is ‘Unstoppable,'” Alexandra said. “The choreography is really cool, the lighting is really cool. … I have a fun jazz-blues song in Act Two. … Then there’s a song that opens Act Two that I’m not allowed to say the name of because there’s a curse word in it, but it’s every single cast member’s favorite song.”

The songbook is self-reflexive as we see characters themselves creating a musical.

“It’s kind of a love letter to New York City theater,” Alexandra said. “There are some beautiful backdrops that are supposed to be reminiscent of Central Park. They’ve put in a lot of landscaping so you can see the buildings of New York behind this apartment. … It’s kind of a lens into the creating of a show versus the show itself, which is really cool.” 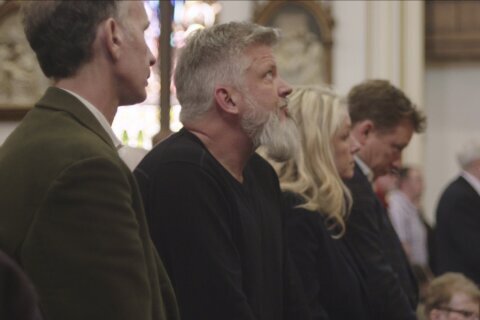