It was the first local film festival to go virtual at the outset of COVID-19 last March.

This year, the D.C. Environmental Film Festival is streaming again from March 18-28.

“We were days away from opening the festival and canceled,” programming director Brad Forder told WTOP of last year’s festival. “We’ve had to pivot like everyone else into this new virtual space. The upcoming festival … looks different this year because it’s all virtual.”

The 29th annual festival includes over 100 screenings with a dozen free programs.

“The goals for the festival have been the same: to support filmmakers and great films,” Forder said. “The biggest conversation we’ve had over the past year is how to engage with our audience. … We will have live engagements using Zoom and Facebook Live.”

The lineup kicks off Thursday with the opening night screening of “Youth v. Gov.”

“It follows 21 plaintiffs all under the age of 24, 25 who sue the U.S. government over their constitutional right for a clean environment,” Forder said. “The themes resonating from this story are about youth empowerment, diverse voices, standing up for the planet and ultimately this advocacy that brings hope of the next generation.”

The festival continues with the short film “The Sacrifice Zone.”

“It follows activist Maria Lopez-Nunez,” Forder said. “She’s fighting for environmental justice in the Ironbound District of Newark, New Jersey known as the “chemical corridor.” She’s doing important work and this is a very powerful story.”

Get ready for Hollywood star power in “Secrets of the Whales.”

“This is produced by National Geographic,” Forder said. “James Cameron produced it; Sigourney Weaver is the narrator. It focuses primarily on the underwater photography of Brian Skerry, who is just a legend for his photography of sea life. We’ll be sharing that with our audience before its release on Disney+, which is around Earth Day.”

Another Oscar winner is behind the unique film “Gunda.”

“The executive producer behind this is Joaquin Phoenix,” he said. “The director is Victor Kossakovsky. This film is very unique in that it’s shot in all black and white. It’s very artistic, there’s not really a score and it’s brilliantly done. It focuses on a Norwegian farm, in particular pigs, but you’ll see some chickens in there as well.”

Equally artistic is the New England doc “The Long Coast.”

“It’s by a talented filmmaker named Ian Cheney,” Forder said. “It gives us lyrical portraits of individuals living and working along the coast of Maine.”

And for some local flavor, check out the documentary “The Falconer.”

“This is a local D.C. story directed by Annie Kaempfer,” Forder said. “It’s about Rodney Stotts, a master falconer who’s faced a number of challenges in his life. He found falconry and a love for these birds and he’s used these skills to educate and empower.” 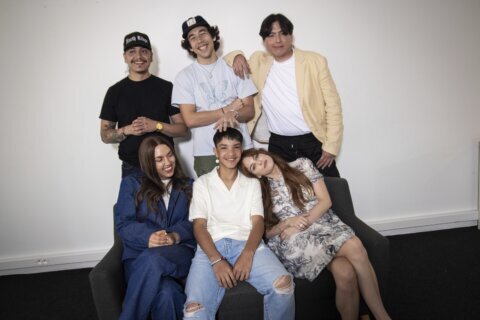