It has been a pivotal year for race in America with the rise of “Black Lives Matter.”

Now, the conversation continues at the D.C. Black Film Festival from Sept. 14-20.

“One of the things I love to use the film festival for is the ability for us to consume a film, but then talk about it afterwards,” founder and festival director Kevin Sampson told WTOP. “The goal is to not only show great films, but also be able to educate people.”

The fourth annual festival received 156 submissions, down due to the pandemic.

“Not only can people not shoot movies, people can’t afford to submit [and] pay the submission fee to any film festival, because right now a lot of people may have lost their jobs,” Sampson said. “We’re talking about artists here, so in many ways, why spend XYZ for a submission fee when you need to put food on the table, etc.?”

This year will be completely virtual, rather than the Miracle Theatre on Barracks Row.

“Festival planning really is year round,” Sampson said. “Around February … we had to make this pivot. A lot of the industry either decided, ‘Hey, let’s hold off for another year, or we’re going to go virtual,’ so that’s what we decided to do. I’m really excited that we’re still able to put it on because, dude, we’ve got some amazing films this year.”

The 67-film lineup kicks off with the locally-themed block “D.C. Stories.”

“There’s ‘Kindred Spirits’ by Cintia Cabib that is a really cool look at two artists in Washington [and] the history of one of the parks in D.C.,” Sampson said. “There’s also ‘Afro Blue,’ directed by T.L. Benton. That short film looks at one of the vocal ensembles at Howard University and it just looks at a semester of how students audition.”

It’s followed by a block of uncomfortable issues called “Deal with This!”

“‘Chasing Echoes’ [documents] a black man named H.K. who raises the Confederate flag and speaks at a lot of rallies,” Sampson said. “It’s this perplexing documentary. … He’s an intelligent guy, he was in the NAACP, but I’m just like, ‘How sway?'”

“‘The SixTripleEight’ looks at a World War II postal directory battalion that was the only all-black female unit in Europe,” Sampson said. “There’s also a film called ‘Sankofa’ from Retji Dakum. His homeland is in Africa, but he was in Baltimore and found this little store called Sankofa. He went inside and really felt … a kindred spirit back home.”

You can also experience the inspirational block “Rise Up!”

“‘Harlem Rising’ [chronicles] the Harlem Children’s Zone, a program that spans 97 blocks [and] serves 28,000 children and adults,” Sampson said. “‘Revolution From Afar’ [explores] Sudanese-American poets and musicians whose families had actually left Sudan for America in the decades past. [They] gather and start to perform.”

If you enjoy coming-of-age stories, check out the block “The Come Up!”

“‘Coco Kids of Paris’ [follows] 6-year-old and 8-year-old girls who meet in Paris,” Sampson said. “‘Bark’ basically looks at a biracial girl who’s trying to come to terms with her identity. … ‘Walking Home: A Survival Guide’ [explores] a father teaching his son. … For black fathers, we all have to have this conversation with our son.”

After that, get ready for “Intimate Portraits: A Look at People and Characters.”

“‘The Zeke Sanders Story’ is a comedy short that follows this aspiring filmmaker,” Sampson said. “There’s one that’s called ‘Transition’ [about] this high school basketball prospect, Matt Coleman, and it chronicles him as he moves into his freshman year at a major university. … There’s one called ‘Tshilobo’ that looks at this UFC fighter.”

“‘The Golden Record’ [follows] the main character who lives in Nassau, Bahamas, [but] he is from another planet,” Sampson said. “‘DVD & Chill’ [is] about this woman, Zora, who is obsessed with Shemar Moore. … ‘The Three Blades’ [tracks] a day in the life of three different men [and] the thing that connects them is they all have this machete.”

Beyond the films, check out Q&As like the black critics panel “Using Our Voice.”

“I’ll be moderating,” Sampson said. “Fahnia Thomas, Tim Gordon, Wilson Morales and Carla Renata will all be on the panel [discussing] the state of film criticism and what it’s like for us as black film critics. … It’s really interesting what the Academy just said about, starting in 2024, any of the films up for Best Picture will have some inclusion.”

It’s almost as if the Academy borrowed its new criteria from the DCBFF.

“All you have to do is have someone that is ‘above the line’ in your crew be of African descent — and that’s the way that it should be,” Sampson said. “If we have more films that have diversity in their ‘above the line’ crews, then we’ll see a difference.”

It all builds to a giant ’90s themed virtual party on Saturday.

“Dress up as your favorite Black film or TV character,” Sampson said. “You have so many to choose from. Is it Martin? Is it Maxine Shaw from ‘Living Single?’ Is it Urkel? Ice Cube from ‘Friday?’ … DJ Prince Ice is going to be spinning. .. We’re gonna have a trivia game. … The three winners [win] a DVD set of ‘Martin’ and a pair of books.”

Speaking of ’90s sitcoms, a DCBFF alumni just signed with Will Smith to create “Bel-Air” on Peacock, a dramatic reimagining of “The Fresh Prince of Bel-Air.”

“Morgan Cooper was in our first year and he had a film that was entitled ‘Room Tone,'” Sampson said. “Beautifully shot, well done, tightly told, so it was no surprise in March of last year when this spec trailer drops. … I still watch it and get inspired, so it’s no wonder that Will Smith picks this thing up. … I’m super proud of Morgan and his work.”

Which of this year’s DCBFF filmmakers will be the next stars of tomorrow? 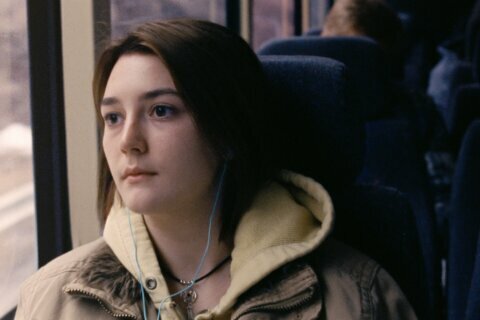