For over a century, Jack London has captured the American imagination with his tales of the outdoors, conjuring images of tireless dog sled treks and remote frontier cabins.

This weekend, we get the latest take in 20th Century Studios’ “The Call of the Wild,” starring Harrison Ford among cutting-edge computer-generated animals that clash with the natural landscapes, but a timeless enough story to maintain its literary majesty.

Set during the Klondike Gold Rush of the 1890s, a domesticated St. Bernard-Scotch Collie mix named Buck is stolen from his California home and sold to Canadians in the Yukon. Several of his masters are brutal, but he finds care in Perrault (Omar Sy) and Françoise (Cary Gee) before meeting best friend John Thornton (Harrison Ford).

The 77-year-old Ford is game for the role of the gruff prospector panning for gold. Few actors have given us so many beloved heroes, from Han Solo to Indiana Jones to Jack Ryan, but Ford has recently settled into more “grumpy old man” roles. Here, he’s at his best looking for bottles of booze, buried by his four-legged friend to sober him up.

Watching Buck, I kept thinking back to “Benji: The Hunted” (1987) as Benji saved mountain lion cubs and evaded a wolf that went flying off a cliff. By comparison, Buck’s CGI image seems detached from the rest of the frame, looking particularly artificial when a blurry Buck bursts out of a kennel to escape the first master who stole him.

To steal a dog-sledding phrase, the digital dog occasionally fades to “mush.”

The film marks the live-action directorial debut of Chris Sanders, who co-wrote and codirected “Lilo & Stitch” (2002) and “How to Train Your Dragon” (2010). This time, Sanders feels caught between the worlds of stark reality and digital animation, hitting his creative stride during time-lapse dissolves of dog sleds traveling different terrains.

Still, it’s impossible to screw up London’s core story. It’s adapted by Michael Green, who in 2017 alone penned the Oscar-nominated “Logan” and the underwhelming trio of “Alien: Covenant” (why kill off Noomi Rapace?), “Murder on the Orient Express” (why so predictable?) and “Blade Runner 2049” (what is Jared Leto even talking about?).

Here, Green takes almost as long to introduce Ford as he did with Deckard’s cameo in “2049.” Don’t let the promotional material fool you — Ford’s character is mostly in the latter half of the movie, despite a brief set-up crossing paths with Buck early on. That’s not necessarily a bad thing, but just manage your movie star expectations accordingly.

Overall, the script is fairly faithful to the novel, albeit softened in places. Buck doesn’t kill his rival husky Spitz, he merely wrestles it into submission. Also gone is Thornton’s famous wager over whether Buck can pull a frozen sled holding 1,000 pounds of flour.

Of course, the most notable change is the finale, as Buck no longer has to avenge Thornton’s death at the hands of Native-American Yeehats — a theme that wouldn’t play so well in our 2020 political landscape. Instead, Thornton enters a deadly showdown with a rival prospector played by Dan Stevens (“Beauty and the Beast”).

Buck’s third act romance with a white wolf is a bit more rushed than it needs to be for him to believably leave the human world and run off with the pack. However, Green impressively adds a spiritual wolf guide that appears periodically to show Buck the way during dangerous life-or-death obstacles, from breaking ice to rumbling avalanches.

As Ford says of nature, “We come and go, but this will always be here.” You can say the same for London’s timeless story. No matter the rendition, there’s truth in the themes of survival, pack mentality and good old bonding between a man and his dog. 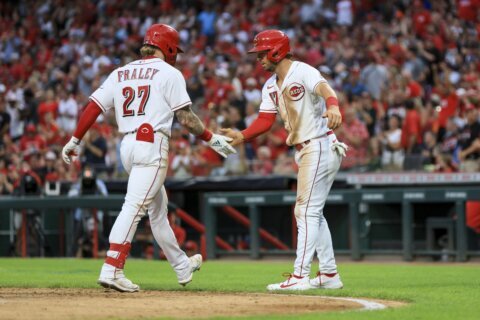