“[Director] Molly Smith is doing an incredible job connecting the dots from what is in this film in 1992 talking about a reality from 1899 to something still so relevant about young people fighting tooth and nail, using their wits, moxie and heart to demand a place at the table in 2019,” said Joe Montoya, who plays Crutchie.

Adapted by Harvey Fierstein from the screenplay by Bob Tzudiker and Noni White, the show follows the true story of the Newsboys Strike of 1899, where New York City’s underdog newsboys take on two of the most powerful men in the country: publishing tycoons Joseph Pulitzer and William Randolph Hearst.

“Joseph Pulitzer, who owned The World, is charging the newsboys more money to buy his paper, so he can make a higher profit,” said Michael John Hughes, who plays Romeo and Spot Conlon. “The newspaper boys and girls have to sell more papers, so it’s basically exploitation of these boys’ and girls’ working habits.”

The main character is Jack Kelly, who dreams of leaving New York for Santa Fe.

“Jack is the newsboys leader,” Montoya said. “He is one of the older boys in this little group of ragamuffins. He is orphaned and he has really become a father figure for many of these boys and taught them the streets, how to survive in New York and how to make a buck. He is the leader of us all who we rally around throughout the play. He leads us into finding our voices.”

Ragamuffins is the perfect descriptor for Alejo Vietti’s street-rat costumes.

“We are the ‘less than’ half of the working class of New York,” Hughes said. “We are poor. A lot of these boys are orphans and don’t even have parents, so a lot of the clothes are pretty tattered, things we found on the streets and bought a long time ago. We have been wearing them for maybe years even. It’s very lived-in.”

“A lot of the set pieces that you’ll see are made of metal, like our fire escapes,” Hughes said. “Our entire deck is painted cobblestone, really trying to paint that New York City image. … What I really love about our production is that, since we are in the round, there really is no escaping anything. Even throughout the entire promenade surrounding the house, there is hanging laundry, so you really get the feeling of being in this space where we live. It’s really the newsies’ space.”

This is the backdrop for Tony-winning songs, starting with “Carrying the Banner.”

“What I love about that number is that it’s really setting up the newsboys’ life,” Hughes said. “They really take pride in what they do, even though they are thought of as less-than in a lot of people’s eyes. They have such a freedom. … Yes they’re working for The World, but they get to go out on their own and sell their paper, so ‘Carrying the Banner’ is a celebration of their lifestyle.”

After that comes “The World Will Know,” a title with a double meaning.

“That is the beginning of the strike when we finally get the idea to go on strike,” Hughes said. “That number is really sticking it to Pulitzer and telling him that what we’re going through isn’t right and deciding we’re going to take action against it.”

Act One closes with the rousing “Seize the Day.”

“It’s probably the most iconic number in the show,” Hughes said. “That number is truly us taking our stance and making a public display of our strike in the most outward way possible.”

After a brief intermission, Act Two opens with the number “King of New York.”

“We’re pretty defeated in what we’ve been through,” Hughes said. “It’s definitely a lower point in the show for some of the newsies, but we do find out that we made the front page of the paper, so it’s us living in that 15 minutes of fame that so many people seek. At that time, papers were everything, so being on the front page of the paper was really, really insane, so it’s a celebration of that.”

Act Two builds to the pivotal number “Once and For All.”

“It’s us finally spreading the word to everyone, like the final breaking point for the newsies in their strike,” Hughes said.

All of these numbers are by Jack Feldman (lyrics) and Alan Menken (music), who composed Disney’s “The Little Mermaid,” “Beauty and the Beast” and “Aladdin.”

“Menken is the voice of Disney,” Montoya said. “He has this beautiful melodic quality where the melody is inescapable and essential. One of the most gorgeous songs is ‘Santa Fe.’ … That motif plays throughout this score. … You’ll hear it in different scenes transformed and transfigured, [which] is important in film scoring, repetition and motif, and he brought that back to Broadway.”

Ironically, neither actor watched the film version growing up.

“I didn’t really know about the movie growing up,” Hughes said. “I watched a lot of the classic Disney movies, but ‘Newsies’ was never a movie my parents bought on VHS I guess. But it’s really funny because I remember singing ‘Santa Fe’ in a voice lesson I had when I was like 13 … so I had heard of it, but I didn’t see the movie until I was in college soon before the Broadway show opened.”

“I came to it first as a musical on stage,” Montoya said. “I knew of it and had seen clips from the film, but I wasn’t the most familiar. This is actually my first production and first full-through experience of the show, which is exciting because it’s approaching it new and fresh. I don’t have a preconceived idea of how it should be or ‘Ooh, I miss the scene like this.'”

When the movie came out in the early ’90s, newspapers were still everywhere before the internet and social media took over. How do they keep it current?

“I think it’s pretty timeless,” Hughes said. “There’s so many parallels about what’s happening in the current climate. There are so many children fighting for their voice now. Technology yes has shifted in such phenomenal ways. … In this day and age we do have Instagram and we do have the internet. … We have people fighting for climate change and LGBTQ rights through current modalities.”

There’s even a media mogul running the country right near Arena Stage, whose proximity to lawmakers makes it one of the prominent theaters in the nation.

“It really is an extraordinary place,” Hughes said. “Everyone at this theater just cares so much about what they do. … We’ve spent so much time — aside from actually dancing the choreography, learning the music and hitting our marks — just really diving into the world of a play and talking with each other about the aim of our characters and the aim of this show and what we are trying to accomplish on a much larger scale. … Quality is such a standard here.”

“I think of Arena as a spectacular company,” Montoya said. “Everyone wants to be here, dive in and create something wonderful. That’s not just a wonderful play, but a wonderful work environment and a great room. … I love coming to work.” 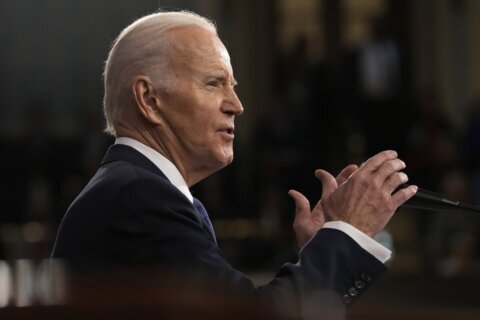 Biden’s State of the Union draws audience of 27.3 million