The Kennedy Center is alive with ‘The Sound of Music’

WASHINGTON — Mary Martin delivered a Tony-winning Broadway smash in 1959, before Julie Andrews turned it into an Oscar-winning blockbuster in 1965.

Now, “The Sound of Music” hits the Kennedy Center from June 13 to July 16, featuring iconic songs by Richard Rodgers and Oscar Hammerstein with direction by three-time Tony-winner Jack O’Brien.

“He’s not afraid to take something that we all know is light and frothy, and find the darker, grittier, sexier edge,” lead actor Nicholas Rodriguez told WTOP. “He believes these were young, vital people at the prime of their lives. … In Act Two, he always says, ‘Hurry, the Nazis are coming.’ There’s no reason to sit back and enjoy the beautiful sound of your voice. We’re on the brink of war, people!”

Inspired by Maria von Trapp’s autobiographical book, “The Story of the Trapp Family Singers” (1949), playwrights Howard Lindsay and Russel Crouse set their story in 1938 Salzburg, Austria, where the restless nun Maria leaves her convent to become governess for widower Captain von Trapp, raising his seven children against the invasion of Nazi Germany.

“He’s faced with a choice to stay and assimilate to this political regime that he doesn’t believe in, or to flee and fight for what’s right in morality,” Rodriguez said of his character. “When they contacted me, I was a little in shock. I was like, ‘I’m not old enough to play Captain von Trapp!’ We were so young when we saw [the movie] that he seemed old. Come to find out, [Christopher Plummer] was only 35 when he made the film, and I turned 40 the week I started, so I was like, ‘OK, I guess I am old enough.'”

While Rodriguez re-familiarized himself with Plummer’s performance, he kept it at a distance.

“Once I started rehearsal, I clicked on a YouTube thing and I watched him do the scene where he plays ‘Edelweiss’ in the living room with the kids,” Rodriguez said. “Then I had to stop, because I thought, ‘I’m going to get it too much in my head if I rewatch this.’ … Who could [ever replace him]? It’s one of those things that’s so iconic that you just have to acknowledge it, honor it, then find your own way.”

The same goes for Julie Andrews’ role as Maria, now played by Charlotte Maltby in her national tour debut. Her father Richard is a Broadway titan as the Tony-winning creator of “Ain’t Misbehavin’.”

“She comes from this theater lineage,” Rodriguez said. “She’s a theater animal and a talented person regardless of who her father is. Just a fun, bright, quirky human being, and we’re just having a blast together. She’s so fresh. She inspires me to just be on my toes and listen to what I’m going to get every night. She’s not a one-trick-pony. It’s that fun, unbridled energy where you don’t know what’s going to come at you, but yet you feel completely safe. Kind of like Maria, she just says what she’s gotta say.”

How else does the stage version differ from the movie?

Those timeless favorites include “The Sound of Music,” “Do-Re-Mi,” “16 Going on 17,” “Climb Ev’ry Mountain,” “My Favorite Things,” “So Long, Farewell” and Rodriguez’s personal favorite “Edelweiss.”

“It just breaks my heart every night,” he said. “It’s such a gorgeous, simple little song. It’s actually the last song that Rodgers and Hammerstein wrote together as a writing team, so that one has a special place in my heart of the ones that I get to do. I’m also a fan of standing in the wings watching Maria and the kids do the ‘[Lonely] Goatherd Song,’ you know, the ‘Ee odl lay, ee odl la, ee odl lay, ee hee hoo’ song! It’s just so fun because you get to see kids being kids! They’re just having a blast with it.”

“The sets are stunning: just big, grand, sweeping sets and lights,” Rodriguez said. “There’s not going to be one blackout [between scenes]. It took my breath away the first time I watched it, how we move so seamlessly from the convent to this giant Austrian manor. … The big reveal of the Von Trapp house — I’d like to say I get entrance applause, but deep down I know they’re applauding for the set. … Just the grandeur they create, and to be at the Kennedy Center, too, which has its own element of grandeur.”

While Rodriguez actually studied in Salzburg for a semester — and thus can relate to the landscapes and architecture in the play — this will be his first time performing at the prestigious Kennedy Center.

“It’s going to be a dream come true,” Rodriguez said. “I’ll probably lose it, to tell you the truth.”

Click here for more information. Listen to the full conversation with actor Nicholas Rodriguez below: 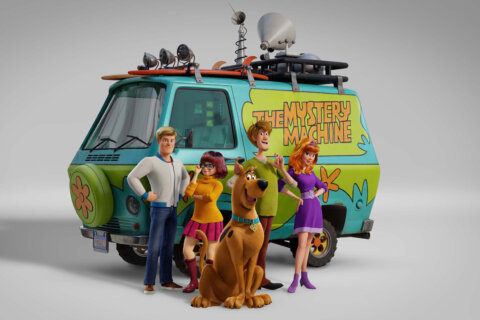