Jerry Seinfeld says, ‘No thanks’ to Kesha’s surprise hug attempt in DC

WASHINGTON — The viral video has taken the internet by storm with memes: “No hugs for you!” WTOP was there…
Listen now to WTOP News WTOP.com | Alexa | Google Home | WTOP App | 103.5 FM

WASHINGTON — The viral video has taken the internet by storm with memes: “No hugs for you!”

WTOP was there as Jerry Seinfeld rebuffed Kesha’s attempt at a hug three times at the Kennedy Center on Monday night. It happened at “A Night of Laughter and Song” to benefit the David Lynch Foundation’s initiative of Transcendental Meditation, which Seinfeld has practiced for 45 years.

During a red carpet interview, Seinfeld was surprised from behind by the “Tik Tok” singer.

“I’m Kesha! I love you so much,” she exclaimed, as a surprised Seinfeld replied, “Oh, thanks.”

As Kesha asked for a hug, Seinfeld politely said, “No, thanks.”

“Please,” Kesha insisted, as Seinfeld repeated, “No, thanks.”

“A little one?” she said, reaching in for a hug, as Seinfeld stepped away, “Yeah, no thanks.”

As Kesha walked away defeated, WTOP Entertainment Editor Jason Fraley quipped, “Well, that was a nice moment,” causing Seinfeld to admit through fits of laughter, “I don’t know who that was.”

When WUSA’s Tommy McFly explained, “That was Kesha,” Seinfeld said, “Well, I wish her the best.”

“You can look her up after,” Fraley said, as McFly quoted Kesha’s lyrics, “‘Wake up like P Diddy? Bottle of Jack?’ That whole thing?” Seinfeld replied, “Okay,” feigning a nod of recollection.

In Seinfeld’s defense, he laid out his ground rules in a recent interview with “CBS Sunday Morning.”

“You must get people coming up to you all the time,” CBS host Anthony Mason asked the comedian.

“It’s part of my job,” Seinfeld replied, adding the caveat, “I do insist on a certain level of civility. Don’t yell at me; we haven’t met. Don’t touch me. Nobody feels good having a total stranger touch them.”

Either way, it was quite the impromptu moment that seemed too good to be true.

But we can assure you it was real — and it was spectacular. 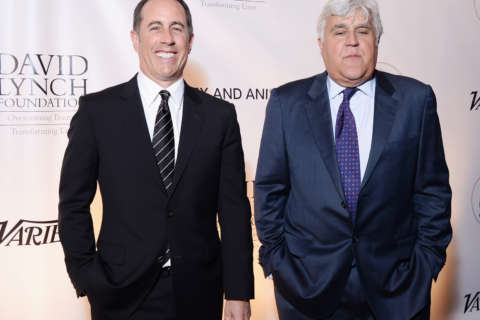