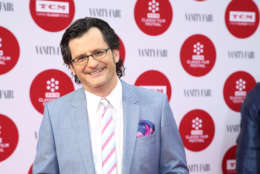 WASHINGTON — Hollywood is in his blood, but Washington made his memories.

While his grandfather Herman wrote “Citizen Kane” and his great-uncle Joseph directed “All About Eve,” Turner Classic Movies host Ben Mankiewicz grew up in D.C. admiring his famous father Frank.

“I grew up where you are,” Mankiewicz told WTOP. “My dad was a significant political player in Washington, D.C., Bobby Kennedy’s press secretary, ran George McGovern’s campaign, president of National Public Radio. My dad was ‘kind of a big deal’ in D.C. — at least to a kid like me — so I thought he was the most successful person in the family. … My first TV job was at ‘The George Michael Sports Machine.’ I worked for George Michael and I worked for Glenn Brenner [in] back-to-back summers!”

This week, Mankiewicz comes to a silver screen near you with TCM’s “Big Screen Classics,” screening a series of iconic movies at the multiplex. So far this year, TCM and Fathom Events have presented “Singin’ in the Rain,” “An Affair to Remember,” “All About Eve,” “North By Northwest,” “The Graduate” and “Smokey and the Bandit.” Now, Mankiewicz joins WTOP to preview the stellar slate to come.

“I try to avoid hyperbole when talking about these movies, but it’s really hard not to with ‘The Godfather,’ because it’s entirely possible that it’s the single greatest American movie ever made,” Mankiewicz said. “It comes right in the middle of the most critical, vibrant and most interesting 10-year period in American cinema history: 1967-1976. … Right in the middle of that, ‘The Godfather’ might just be the best of all of them, along with what is unquestionably the greatest sequel ever.”

While “The Godfather” could’ve been a simple gangster flick in other less-creative hands, Coppola’s auteur artistry elevated it into an operatic saga that both celebrated the immigrant experience of the American dream, while exposing the power-hungry corruption by those wishing to hold the strings.

“Paramount optioned the book before it was published, but it was going to be a pulp gangster flick,” Mankiewicz said. “Coppola didn’t like Puzo’s novel, [but] he was on a boat trip in Italy scouting locales, when all of a sudden, he gets it. … He sees all of this subtext and thinks, wait a minute, this is not a gangster picture, this is a family picture, a corporate cutthroat picture, a power picture. … That’s when he understood what this movie could be, then he just elevated it another three or four levels.”

Billy Wilder’s beloved cross-dressing comedy follows two musicians (Tony Curtis and Jack Lemmon), who flee a gang by dressing as women to go on the run with a sexy nightclub singer (Marilyn Monroe).

While the film inspired future flicks from “Tootsie” (1982) to “Mrs. Doubtfire” (1993), Mankiewicz disagrees with the American Film Institute’s claim that “Some Like It Hot” is the best comedy ever.

“I don’t share that enthusiasm,” Mankiewicz said. “It’s perfectly executed, but it’s one joke: guys in a dress. … I would take ‘Sunset Blvd,’ ‘Double Indemnity’ or ‘Ace in the Hole,’ that is my favorite Wilder movie. … It’s phenomenal and unbelievably prescient about the way the American media is headed. … [‘Some Like It Hot’] must be seen, I’m not knocking it, I’m just saying that I don’t think it’s the funniest movie of all time — in part because I think the following movie we have in July is actually funnier.”

Set against an ’80s soundtrack of The Go-Go’s and Jackson Browne, “Fast Times at Ridgemont High” follows the outrageous extracurricular antics of a group of high schoolers in Southern California.

“If the ’80s into the ’90s was the decade of high-school comedies, this is [the catalyst],” Mankiewicz said. “All of those high-school comedies, every single one of them — ‘The Breakfast Club,’ ‘Sixteen Candles,’ ‘Dazed and Confused’ — all those movies are disciples of ‘Fast Times.’ … I didn’t love it when it came out. I don’t know if I was intimidated by it or I thought these kids were above my pay grade … but second viewing came quickly and I developed a legitimate passion for the brilliance of this movie.”

Not only did the film give us director Amy Heckerling (“Clueless”) and screenwriter Cameron Crowe (“Jerry Maguire”), it introduced countless actors, namely Sean Penn as the half-baked Jeff Spicoli.

“This was our introduction to Sean Penn,” Mankiewicz said. “It was tempting to think this was just a guy who could just play a stoner teenager, and it turned out he’s this actor of tremendous depth. But those other characters, man! I feel connected to Rat, Stacy, Forest Whitaker. I mean, Forest Whitaker and Sean Penn in a high-school movie! And Jennifer Jason Leigh! You just don’t think when you see ‘Fast Times’ that you’re going to see that many Oscar nominations later in these people’s careers.”

Warren Beatty and Faye Dunaway star in Arthur Penn’s groundbreaking portrait of notorious bank robbers, joining such 1967 peers as “The Graduate,” “Cool Hand Luke,” “In the Heat of the Night” and “Guess Who’s Coming to Dinner” in altering American history by shattering social conventions.

“They’re all about different ways of challenging authority,” Mankiewicz said. “In 1967, that’s what was happening in America. We were pre-Tet Offensive, so there was about to be a huge swing in public sentiment for the Vietnam War; we were in the middle of the sexual revolution; and most critical, we were in the middle of the civil rights movement. … The idea of flipping off ‘The Man’ became part of a new American identity — and ‘Bonnie & Clyde’ represents that most dramatically. ”

This social upheaval fit perfectly with the title duo, who became beloved anti-heroes for striking back against the banks during a Great Depression when Wall Street greed devastated Middle America.

“These are bad guys, they kill cops and rob banks,” Mankiewicz said. “But in that wonderful scene that defines the movie, Clyde is teaching Bonnie how to shoot and the old owners of the home come up on it. … They shoot up the [foreclosure] sign that says the bank has taken it over. They’re much obliged and he says, ‘I’m Clyde Barrow, this is Bonnie Parker, we rob banks.’ Right there, they’re the heroes, set in the Depression when capitalism failed America. … Really important movie to look at politically.”

Steven Spielberg is arguably the most famous filmmaker of all time, thanks to countless blockbusters filled with iconic characters and memorable moments that have formed the fabric of our pop culture.

Now, you can relive the magic of his most commercially successful movie, “E.T. the Extra-Terrestrial,” a heart-tugging tale of friendship between a 10-year-old boy grappling with his parents’ divorce and a lost alien stranded here on Earth. Together, they attempt to “phone home” and soar across the moon.

“To see movies like this on the big screen in a crowded theater where everybody knows the lines and there’s just one significant, meaningful scene after another,” Mankiewicz said. “Everyone in the theater knows it’s coming, but they’ll all laugh and cheer. … That’s a wonderful shared experience.”

“‘The Princess Bride’ is kind of a perfect movie, that’s how Carol Kane described it, just perfect,” Mankiewicz said. “It’s just one of those movies that resonated with people. I saw it three weeks ago in preparation for the [TCM Classic Film Festival]. Talk about holding up! I’m sitting there, I cried 19 times during the movie, you cheer, and every time you think this is too stupid, it’s just too perfect.”

“Cary Elwes has aged perfectly,” Mankiewicz joked. “Almost all the dialogue that [Crystal] has toward the end when they revive Westley was improvised. Crystal told the makeup person that it needed to be a cross between former Mets manager Casey Stengel and his grandmother. … Reiner was laughing so hard that he got thrown off his own set! His guffawing belly laugh was getting picked up on the mic, so he had to excuse himself as they shot that scene with Billy Crystal doing Medieval Yiddish.”

After 75 years, “Casablanca” remains beloved “as time goes by,” thanks to an epic love triangle where ordinary characters rise to extraordinary heroics. Its quotable dialogue (“We’ll always have Paris” to “Here’s looking at you, kid”) inspired the Writers Guild of America to vote it the greatest script ever.

“Those lines come ironically enough from three sets of writers,” Mankiewicz said. “Julius and Philip Epstein wrote Draft #1 [with] most of the Renault-Rick stuff. [Howard] Koch comes in and beefs up Paul Henreid and gives some strength to the Nazis. … Then, Casey Robinson comes in uncredited, he did most of the romance, so it was different writers who came together and created a perfect script.”

“They sing ‘La Marseillaise’ to overpower whatever hideous song the Germans are singing,” he said. “Henreid says, ‘Do you know ‘La Marseillaise?’ Play it.’ The band will play it but looks at Bogart first like ‘Boss?’ That scene tells you everything you need to know. Bogart may say he doesn’t care, but all he does is a little nod: ‘Go ahead.’ I love that moment! I could watch that moment a thousand times.”

Rounding out this year’s slate is a 50th anniversary presentation of Stanley Kramer’s “Guess Who’s Coming to Dinner,” a groundbreaking social picture about interracial marriage. The legendary Sidney Poitier stars as a black man meeting his white in-laws (Katharine Hepburn and Spencer Tracy) in a pivotal performance the same year as his roles in “In the Heat of the Night” and “To Sir, with Love.”

The film was way ahead of its time, arguing for interracial marriage before it even became legal.

“Spencer Tracy died 17 days after production wrapped, and two days after Tracy died, the Supreme Court issued its decision in ‘Loving v. Virginia,’ undoing interracial marriage bans,” he said. “Many states banned a black man and white woman from getting married, so this was a seminally important movie. … That’s 50 years ago, it was not 500 years ago, so we’re not that far removed from all this.”

Just as Tracy’s death made Hepburn tear up in the final scene, this year’s “Big Screen Classics” series comes at an emotional time for Mankiewicz after the death of TCM host Robert Osbourne in March. What better way to pay tribute to Osbourne’s legacy than by watching the very movies he loved?

“Robert was the embodiment of TCM,” Mankiewicz said. “He left this place better prepared than we’ve ever been to preserve and present these movies, to bring them to people in a meaningful way. The network has never been stronger, and that is a testament to Robert’s ability to tell a story and forge a connection between a television channel and an audience that just does not exist anywhere else in this medium. There is no channel that has as intense a bond with its audience than TCM.”

Click here for more info on TCM’s “Big Screen Classics.” Listen to the full chat with Ben Mankiewicz below: