After ‘Spotlight’ debut, which gems will film fest uncover next?

WASHINGTON — It hit a home run in its rookie season last year, predicting the eventual Oscar Best Picture by hosting the East Coast premiere of “Spotlight.”

“We could not believe it ourselves,” festival founder Diana Schemo told WTOP, still amazed at the “Spotlight” run to the Oscars. “It was like, ‘Pinch me, is this really happening?'”

“‘The Ivory Game’ is an incredible film, in a way like ‘Spotlight’ in the sense that it has an important public interest story to tell,” Schemo said. “In this case, it’s about ivory poaching, the extinction of elephants in Africa,  the criminal networks and the Chinese legal system that has a quota that allows legal importation of ivory that’s exploited and used to bring in tons and tons and tons [of tusks].”

The documentary exposes the hard truth that an elephant is killed for its tusks every 15 minutes. Over the past five years, 15,000 have been killed, as a single kilogram of ivory can sell for $3,000.

“There’s an important environmental and wildlife protection story, but there’s also an important journalistic story nested inside,” Schemo said. “The film is officially a documentary, but it plays like a thriller. It tracks a group of activists that runs WildLeaks, which is like WikiLeaks but for tips on poaching. … That group gets tips on trafficking and puts together teams to go after the traffickers.”

Co-directors Kief Davidson and Richard Ladkani will be on hand Thursday night, as well as WildLeaks founder Andrea Crosta and Chinese freelance journalist Hongxiang Huang, both featured in the film.

“That’s what is unique about a festival experience over a theatrical setting or at home on television,” co-founder Sky Sitney said. “We’re committed to bringing the filmmakers, but beyond that, also the films’ subjects. … The angle is always how the film is functioning as a work of investigative journalism and how journalists are recognizing the power of visual storytelling to expand their own mission.”

“Everybody was watching the Panama Papers investigation this year,” Schemo said. “The scope and scale was astonishing, but it actually started before that. There’s a guy called Rudy Elmer, who was a vice president at Julius Baer and first opened his mouth about this. He was in charge of secret bank accounts in the Cayman Islands and just released a whole bunch of information to WikiLeaks.”

You can hear from Elmer in person on Friday night, as the whistleblower will attend the screening alongside director David Leloup and New York Times National Correspondent Eric Lipton.

“It prompted an unprecedented level of scrutiny to these bank accounts, and the Swiss government responded by basically going after Rudy Elmer. He ended up having to go into exile,” Schemo said. “This story is about hidden money and how well-protected it is. The Justice Department went on to try to prosecute … but at the core of it was the work of investigative journalism and a whistleblower.”

Friday’s slate continues with the documentary “All Governments Lie,” a tribute to legendary investigative reporter I.F. Stone, who exposed government corruption from the 1950s-1970s.

“I.F. Stone is the grandfather of investigative journalism,” Schemo said. “He worked in Northwest. He was a journalist’s journalist. He didn’t go to the noonday briefings at the White House or State Department. … He would go through the records. His operating assumption was ‘all governments lie’ and it was his job to figure out just how and where — and he did it day in and day out for decades.”

The film is based on the book by Myra MacPherson, who will attend with director Fred Peabody, producer Peter Raymont, journalist Dan Froomkin, and Stone’s nephew and journalist Peter Stone.

“It looks at his legacy and looks at who now is operating in his spirit,” Schemo said. “It identifies a handful of journalists — Jeremy Scahill, Matt Taibbi, Amy Goodman, Glenn Greenwald and Dan Froomkin — it identifies these people and profiles them as the people who are carrying the torch.”

“He poses a very interesting question, asking, ‘Can Wall Street be used as a force for morality?'” Schemo said. “What he does is he takes a billion-dollar short position on Herbalife … and goes on the attack and makes a full-frontal assault on this company and on its business practices.”

Ackman will be at the screening, alongside director Ted Braun, human rights activist Julie Contreras, and NPR’s Ricardo Sandoval Palos. Herbalife was invited to share its side, but opted not to come.

“This is a very accessible drama,” Schemo said. “‘The Big Short’ had a very interesting way of presenting complex ideas about derivatives and how mortgages are bundled and sold as securities and all that. [‘Betting on Zero’] is not that difficult. Anybody who’s read the stories about Bernie Madoff or any number of multilevel marketing schemes understands what a pyramid scheme is.”

Saturday brings an equally intriguing slate, starting with Gianfranco Rosi’s “Fire at Sea,” which won the Golden Bear at the Berlin International Film Festival. It follows an Italian island 70 miles from Tunisia called Lampedusa, which has become a primary stop for hundreds of thousands of refugees fleeing violence, poverty and persecution throughout Africa and the Middle East en route to Europe.

“It’s a somewhat poetic, if not lyrical, exploration,” Sitney said. “We see this happening in the headlines all the time, boats packed to the rafters with people that are overturning. So it really focuses on the impact on this island, where you see the quiet, day-to-day, quotidian experiences of people living their lives in Sicily while this literal global crisis is washing up on their shores.”

On hand at Saturday’s screening will be Ron Nixon, Washington Correspondent for The New York Times, and Kathleen Newland, co-founder and senior fellow with the Migration Policy Institute.

“It’s looking at this quiet fishing town that happens to be the most unexpected backdrop for one of the greatest tragedies unfolding in our day,” Sitney said. “It’s a very powerful and important film, and it’s also a work of extraordinary accomplished filmmaking. … This has a very distinct cinematic craft.”

After all of those heavy subjects, pour yourself a glass of “Sour Grapes,” a much lighter documentary tracking a quirky 20-something counterfeiter who mixes California reds with off-year vintages to sell millions of dollars worth of fraudulent “fine wines” to dupe wealthy boozers at $20,000 a bottle.

“This is incredibly enjoyable,” Sitney said. “From the get go, you know that he’s a fraud. So that is not the question. The question is, ‘How on earth did this person manage to fool so many people? What was his process?’ It’s a truly edge-of-your-seat experience and takes you into the world of fine wine. You don’t have to even appreciate wine to appreciate this story, because it’s all about how someone is able to pull off such a massive con and fool people who are proud of their delicate palette.”

While the subject of “Sour Grapes” is unable to attend the festival due to his incarceration, a different Saturday documentary takes a very serious look at criminal justice. “Solitary” explores Red Onion State Prison in southern Virginia, one of the more than 40 “supermax” U.S. prisons holding 100,000 prisoners in solitary confinement, a practice that’s deemed a form of torture in much of the world.

“The filmmaker spent essentially a year watching this prison and filming it,” Schemo said. “Initially, the administrators and warden of the prison thought they were doing something good, so they were happy to have her come and film. But what emerged was quite a different story of people who are kept in prison indefinitely in solitary confinement without any judicial review or outside oversight.”

Director Kristi Jacobson will be in attendance, alongside freelance journalist Lisa Armstrong and investigative author Pete Earley of the book “The Hot House: Life Inside Leavenworth Prison.”

“There’s one guy who’s been in solitary confinement since 1984,” Schemo said. “I think it’s a tragic thing that’s developed inside the prison system. This film is going to give people — who never have a chance or a reason to see the inside of a prison — a very intimate look at its dark underside. … This is really an overlooked thing that has developed and really should work at everybody’s conscience.”

The festival concludes with the closing night film “Abacus: Small Enough to Jail,” which follows the only — we repeat, only — bank that was indicted as a result of Wall Street’s 2008 financial collapse.

“None of the big guys [were punished],” Sitney said. “There was only one. And what is this one? A tiny little mom-and-pop operation in Chinatown, New York City, run by first-generation Chinese parents with their second generation Chinese-American children. … It really looks at the justice system and racism within that and how one is being scapegoated … who is targeted and who is left unscathed.”

It’s the latest documentary by Oscar-nominated filmmaker Steve James (“Hoop Dreams,” “Life Itself”), who will be on hand alongside “Frontline” producer James Jacoby, investigative journalists David Lindorff and Ti-Hua Chang, and former prosecutor Vera Sung, a member of the subject family.

“This is a film quite dear to my heart because of my background spent in documentary film; I admire to no end the filmmaker Steve James,” Sitney said. “He’s a terrific filmmaker and deeply empathetic both in person and through his film. You can feel that intimacy he develops through his subjects.”

Whether you’re a journalist or filmmaker, “Double Exposure” brings two vital lenses together, giving twice the investigation, twice the scrutiny and twice the artistry in bringing important truths to light.

“We see ourselves as being a place that journalists … if they’re working on an interesting story and they’re trying find, ‘Would this make a good movie?’ This is the place they should come,” Schemo said. “The other way, too, for the filmmaker who says, ‘I’m looking into this issue’ … This is the place they’ll find a journalist to talk to and say, ‘Can we look into this and see if there’s actually a story here?'”

Is there another “Spotlight” in our midst this year?

Click here for more information. Listen to the full conversation with Diana Schemo and Sky Sitney below: 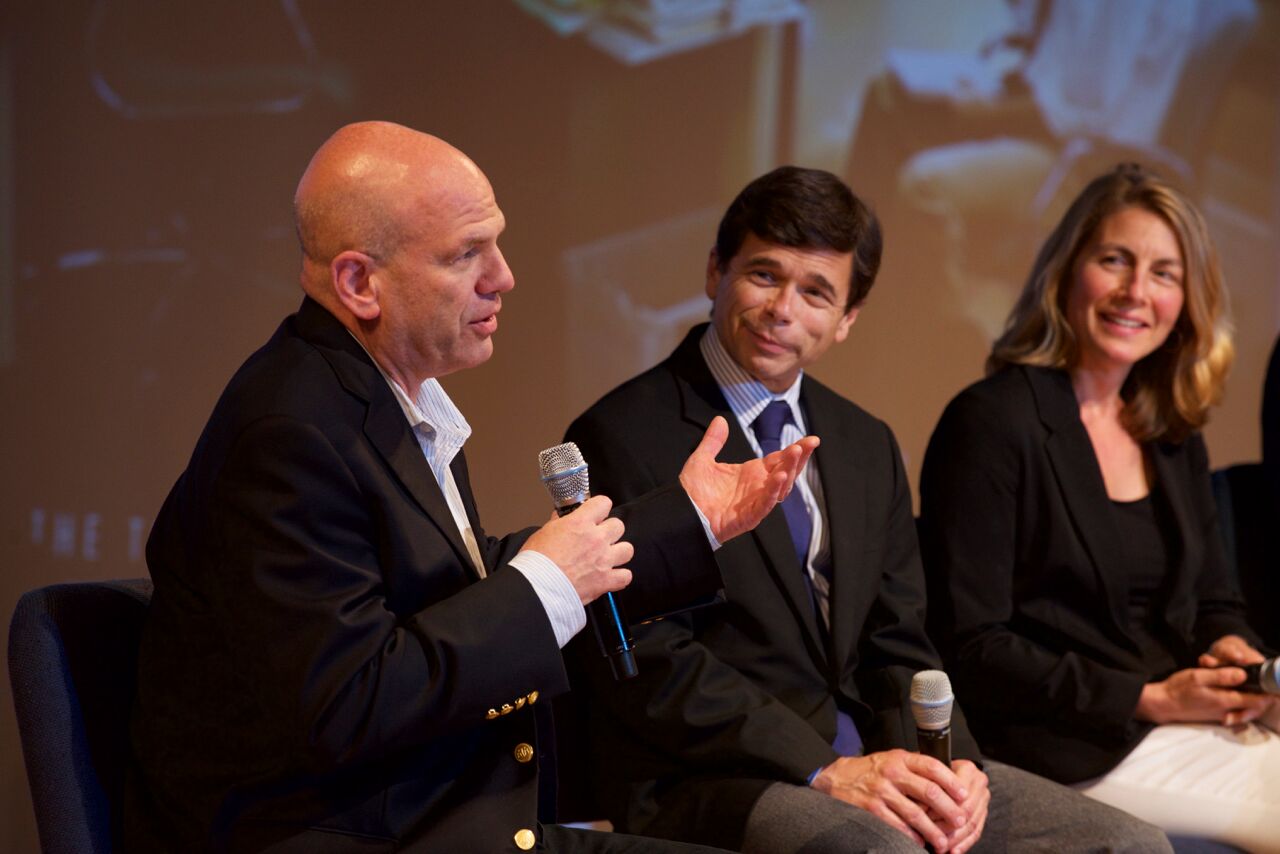