Boyz II Men, the top-selling R&B group of all time, will join the National Symphony Orchestra for a special two-night concert at the Kennedy Center on Friday, May 20 and Saturday, May 21.
Listen now to WTOP News WTOP.com | Alexa | Google Home | WTOP App | 103.5 FM
(1/18) 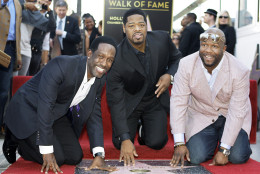 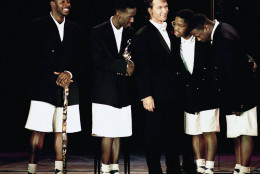 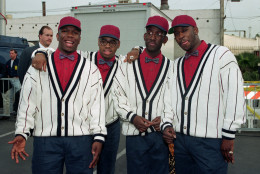 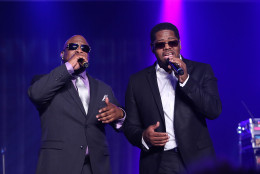 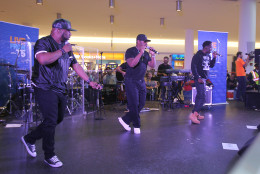 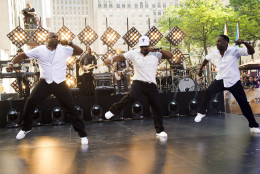 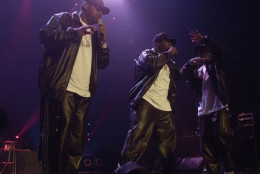 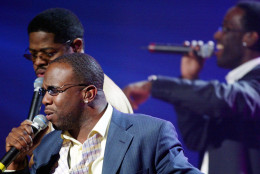 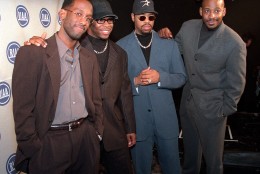 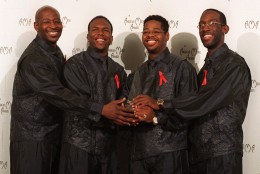 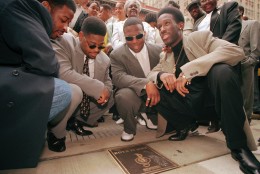 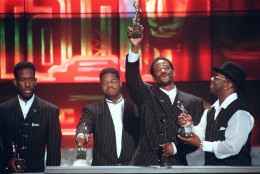 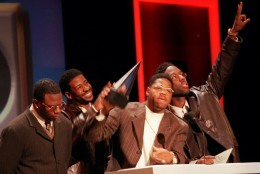 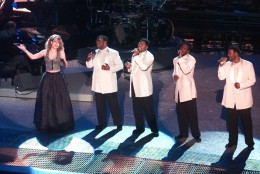 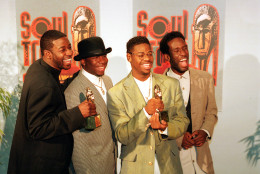 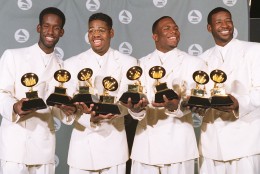 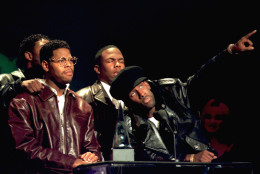 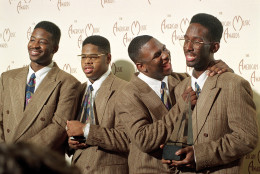 Boyz II Men, the top-selling R&B group of all time, will join the National Symphony Orchestra for a special two-night concert at the Kennedy Center on Friday, May 20 and Saturday, May 21.

“I am super stoked to work with these guys,” conductor Steven Reineke said. “It’s the type of music that you can wrap a symphony orchestra around … This type of Motown R&B sound, it works really well. You get the horns in there and the lush string sounds; it’s such a great melding of two worlds.”

“We’ve been doing these shows for over five years,” Boyz II Men founder Nathan Morris told WTOP. “We started in Japan, we did a tour there where we did about two to three weeks … and we decided to bring it here to America … To take what we’ve done in our career, strip it down and let people hear an orchestral arrangement is completely different from what most people are doing.”

In a way, it’s Boyz II Men returning to its musical roots.

“We wanted to do it because we come from a musical background,” Morris said. “We went to the [Philadelphia] High School for Creative Performing Arts. We all studied vocal music. I actually was in an orchestra from third to ninth grade. I played the trumpet. So all this music is a part of who we are.”

The group — Nathan Morris, Wanya Morris, Shawn Stockman and formerly Michael McCary — formed in Philly where, as the lyric said, “back in school we used to dream about this every day.”

“They actually dreamed about it everyday, I just made a group ’cause I was bored,” Morris joked.

“I got stuck in a performing arts school and I really wanted to go to a school that had a better athletic program, ’cause my goal was to play professional football. But my mom forced me into this school and I was bored and had nothing to do, so I figured I’d make a group. That’s how it got started.”

“That’s the thing that kept us all together,” Morris said. “What we heard come out of our mouths we hadn’t heard from anything else … so we just fell in love with the sound that we could make.”

So, as the song goes, they started a group and there they were, kicking it just for us with “Motown Philly” off their breakthrough 1991 album “Cooleyhighharmony” for Motown Records.

“Shawn and myself wrote it … in my backyard,” Morris said. “Michael Bivins gave us the concept and said we should write a song about Motown Philly. At that time, we happened to be on Motown Records and we were from Philly, so we just decided to come up with a story about how we got started, where we came from and give people a little insight into Philly and what we were about.”

The group members will never forget the first time they heard their first hit on the radio.

“All of us were in different places when we heard it,” Morris said. “Shawn and I actually just happened to be together driving in my then sister-in-law’s car and almost rode off the highway.”

“Motown Philly” reached No. 3 on the Billboard Hot 100, while “It’s So Hard to Say Goodbye to Yesterday” made it all the way to No. 2, catapulting the album to go nine-times platinum.

“That was a song that we used to sing back in the day at a bunch of funerals,” Morris said. “Every time somebody died, they called us. We used to sing it all the time and just decided to put it on our album.”

The following year, Boyz II Men found success singing on a pair of movie soundtracks, reaching No. 3 with a cover of The Five Satins’ “In the Still of the Nite” for “The Jacksons: An American Dream” soundtrack, while dominating at No. 1 with “End of the Road” for the “Boomerang” soundtrack.

“We got a call that Babyface wanted us to do a song for the ‘Boomerang’ soundtrack that Eddie Murphy was in, and we’re big Eddie Murphy fans, so it was a no brainer for us. We just went in and recorded it in Philly. We did it in like a day … recorded it, and didn’t hear back about the song for about three, four, five months and all of a sudden it came out and started climbing the charts.”

“End of the Road” broke Elvis Presley’s longevity record by staying at No. 1 on the Billboard Hot 100 for a whopping 13 weeks, broken later that year by Whitney Houston’s “I Will Always Love You.”

If “Cooleyhighharmony” put them on the map and the movie soundtracks proved their staying power, their sophomore studio album “II” launched them into the stratosphere going 12-times platinum.

Bursting out of the gate with the beatbox track “Thank You” and the catchy jazz of “U Know,” the album’s biggest hit was the sultry “I’ll Make Love to You,” which stayed at No. 1 for a record 14 weeks.

Ironically, the group was hesitant in recording it.

“That was a song we didn’t want to do,” Morris admitted. “We told the label that we didn’t want to do it because it sounded too much like ‘End of the Road,’ which it did. Artists sometimes want to change and do different stuff, but the label said, ‘We don’t really care what you think. We already heard people say that this is a hit, so you’re gonna sing it and put it out,’ and that’s what it is.”

Most bands would be satisfied with a record run atop the charts, but Boyz II Men broke its own record when the apologetic “On Bended Knee” spent 15 weeks at No. 1 on the Billboard Hot 100.

The feat made Boyz II Men just the third artist in music history to replace itself at No. 1 in the U.S., joining the elite company of Elvis Presley and The Beatles — an astonishing accomplishment.

Unlike “I’ll Make Love to You,” the group liked “On Bended Knee” from the start.

“That was a song we just fell in love with as soon as we heard the instrumental,” Morris said. “Jimmy Jam played it for us and sang on top of it [with] some really horrible vocals, but we really didn’t care because the music was so beautiful that we knew once we got on it that it would be magical.”

The monumental “II” also spawned a third massive hit with “Water Runs Dry,” which reached No. 2.

“We actually sat down in Babyface’s house … a couple days after the big earthquake out in L.A.,” Morris said. “We went and sat down with him, sat around a guitar and kind of wrote the hook to ‘Water Runs Dry’ and then a couple days later we got in the studio … and knocked it out.”

Boyz II Men also found success collaborating with other artists, reaching No. 32 with Brian McKnight on the holiday hit “Let it Snow,” while winning a Grammy alongside LL Cool J with “Hey Lover.”

Still, the most successful collaboration came with Mariah Carey on the heavenly, heartbreaking grief anthem “One Sweet Day,” which to this day holds the Billboard record with 16 weeks at No. 1.

“We got a call that she wanted to work with us and we all got in the studio and she let us hear the song she was working on,” Morris said of Mariah. “It was ironic that I happened to be writing a song that was similar at the same time about our road manager who had passed away. So we got in the studio and combined both my song and her song and came up with ‘One Sweet Day.'”

The album kicked off with the soothing track “Doin’ Just Fine,” before entering into the smash hit “4 Seasons of Loneliness,” which brought Boyz II Men to the No. 1 spot once again. It only lasted a week as the death of Princess Diana caused Elton John’s remake of “Candle in the Wind” to surpass it.

“That was a Jimmy Jam and Terry Lewis record … They just got a certain sound,” Morris said. “It was one of those beautiful songs that … we just fell in love with. It’s kind of tough to turn that song down.”

The album also spawned the ultimate track to play on any Mother’s Day, “A Song for Mama,” which reached No. 7 on the Billboard Hot 100 and No. 1 on the R&B charts. It also appeared on the soundtrack for Babyface’s 1997 film “Soul Food” starring Vanessa Williams and Vivica A. Fox.

“That was actually another soundtrack,” Morris said. “Babyface was doing his record label thing at the time … It was a song for his movie soundtrack and we wound up putting it in our album.”

Their fourth studio album “Nathan Michael Shawn Wanya” delivered another hit “Pass You By,” which became the closing track on “Legacy: The Greatest Hits Collection,” which went two-times platinum.

But the turn of the millennium also signaled a major change, as the deep-voiced McCary left the group to pursue other interests, transforming the iconic quartet into a harmonizing trio.

“Honestly, a lot of people don’t know he’s been gone almost 16 years,” Morris said. “The show must go on. You gotta keep it moving. There’s a lot of people out there that want to hear the music.”

What’s more, the group remains the top-selling R&B group of all time, outselling The Temptations, The Four Tops, The Drifters and The Jackson Five, all of which are in the Rock and Roll Hall of Fame.

If all those Motown groups are in, Motown Philly deserves to be in for dominating its era like those groups in the ’50s and ’60s. Rock purists may scoff at the lack of electric guitar, but there’s plenty of precedent, particularly with the Hall’s evolving expansion to include more genres. If Jimi Hendrix and Prince taught us to “rock,” then certainly The Temptations and Jackson Five taught us to “roll.”

“You don’t think N.W.A. in the Rock and Roll Hall of Fame either because it’s rap music, but this year [they got in],” Morris said. “We are actually candidates to be in now … You have to be in the business for 25 years or something like that, so we’re on the docket, it’s just a matter if we get in.”

Morris said the group doesn’t stress about a potential induction, but admits it would be nice.

“We hope so,” Morris said. “It would be great to have your kids show up and see your dad go into the Rock and Roll Hall of Fame. It would be nice.”

Until then, you can show up at the Kennedy Center for two nights with Boyz II Men and the NSO.

“These guys were huge in the ’90s and they’re still popular today. A seminal R&B group,” Reineke said. “They’ve spent at least 50 weeks in the No. 1 spot and they’re fourth on the list of longevity on the Billboard No. 1 spot, only behind Elvis, The Beatles and Mariah Carey. That’s wild!”

Considering those stats, you could say this weekend’s shows are a chance to witness history in action.

“This is not a typical Boyz II Men concert, so even if they’ve seen us before, they’ve never seen anything like this,” Morris said. “They definitely want to check this one out. It’s a really classy show.”

Click here for more information. Listen to the full interviews with Boyz II Men and Steven Reineke below: