Ellis and Prenatt resist such praise. But at Rancho Buena Vista High School, where the pair were teammates on the Longhorns softball team for four years before graduating in 2018, that’s how they’re remembered.

“They should absolutely be considered heroes. What they did was selfless and it’s going to help so many girls in the future,” said Ava Bradford, a former Rancho Buena Vista softball player.

Ellis’ and Prenatt’s story is rare. A four-month investigation of Title IX and high school sports by the Shirley Povich Center for Sports Journalism and Howard Center for Investigative Journalism found many high school girls lack the information to recognize Title IX violations and to demand change from school officials.

Not Ellis and Prenatt.

On May 8, 2018, as teammates looked on, they read a letter from the Vista Unified School District board telling them the board had approved a new softball field to be built on campus. They’d won their fight for equal treatment.

“It was a really powerful moment,” Prenatt said. “I almost started crying …’’

As seniors, the friends and teammates were students in a government class taught by Timothy Leary, a beloved figure at the school for 26 years. In the first unit of Leary’s class, Ellis and Prenatt learned about the five concepts of democracy, including civil rights and Title IX’s guarantees of gender equality in sports. As they discussed the law and its purpose, a lightbulb went on about their softball field.

“Sydney and I sat down and analyzed Title IX as a law. We’re like, ‘OK, this is a big deal. This is a very major issue,’” Ellis said. “We always noticed the differences … but we didn’t realize that there was a law specifically that addressed that.”

The softball field was off-campus at Buena Vista Park, a third of a mile from the school. The softball players had to provide their own transportation, or walk. The field conditions were below average. The softball team’s storage facilities did not match those for the baseball team. Players had to walk to their classes with their softball gear. The bathrooms at the park were also sometimes locked and there were instances when the athletes said they felt their privacy was being violated by passers-by.

“It just made us feel underappreciated and undervalued (by) the school,” Ellis said. The baseball diamond for boys was far superior. It was on campus, had better field conditions, had a clubhouse to store gear, had access to the school bathrooms and had batting cages. The baseball team determined when it got to use the field. Because the girls played at a public park owned by the city, scheduling games and practices was harder.

“From our perspective, it was so blatantly obvious, the unequalness,” Prenatt said.

After consulting with their government teacher, Ellis and Prenatt focused their yearlong class project on their softball field and Title IX. They approached the school principal in the fall to ask for help. He was not supportive, they said. Attempts to reach the principal, who has left the school, were unsuccessful.

“That’s when we knew that we had to go to the school board,” Ellis said.

“(Danielle) and I were both firing each other up and saying, ‘No, why would we stop because it’s so blatantly an obvious violation,’” Prenatt said. “We also knew the softball team deserves better and our coaches deserve better. That’s why we weren’t really super discouraged by not hearing (what we want).”

They decided to go to a school board meeting on April 12, 2018, after their softball game against Ramona High School. They were dressed in their uniforms when they gave a speech about their proposal for a new field.

“We are asking you to all stand with us so that future girls don’t have to grow up thinking equality has to be earned,” Prenatt told the board. “They grow up believing that equality is expected.”

On Leary’s advice, they then made an emphatic gesture to get the board’s attention.

“Basically, (Leary) told us if you really want to make a statement, right after you give your speech you just walk out,” Ellis said. “That’s what we did, we walked out, and then our teammates, our parents, everybody stood up and just walked out with us.”

About four weeks after the school board meeting, Ellis and Prenatt got the letter with the big news that the district was going to build a new softball field for Rancho Buena Vista High School.

“We read the letter to our entire team and we all started jumping around and screaming,” Prenatt said. “It was a really great moment, and it really made us feel seen and it made me really happy for the future softball players.”

The new softball field, a part of Vista Unified’s $247 million Measure LL Facility Bond Project, opened in February 2021. By then, Ellis and Prenatt had graduated.

But it was about the next generation of softball players having their own field to play on.

“The goal was definitely just to get the girls coming after us a softball field on campus, something that was comparable to the baseball field,” Ellis said. “The biggest goal was just to do better by the next generation, to give them something more than we ever had.”

Bradford, who was a freshman at the time of the school board meeting, was one of the softball players who got to play on the new field as a senior when it opened. “We have so much gratitude for what Sydney and (Danielle) did,” Bradford said.

Ellis’ and Prenatt’s Title IX story lives on in Leary’s government class when he teaches Title IX to his students.

“I use (Danielle) and Sydney in my class in my explanation every single year now,” Leary said. “What is so inspiring was that they were determined and this demonstrates what you can succeed and what you can achieve … when you don’t take no for an answer.” 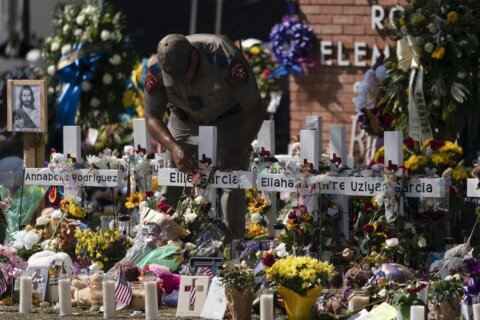