After University of Virginia's historic NCAA championship game win, could there be an increase in college applications for this already very selective school? Two professors who have studied the championship effect explain why there could be an influx.
Listen now to WTOP News WTOP.com | Alexa | Google Home | WTOP App | 103.5 FM

The University of Virginia wasn’t a small or unknown school before its run through this year’s NCAA Tournament, which culminated with a national title Monday night. It draws applicants from around the country and around the world, and only 26% of the more than 37,000 students who applied for admission last year were offered admission.

So the admissions department isn’t exactly bracing for an even more difficult job of screening potential students next year. But maybe it should be.

“It’s great when you can see happy students who get excited about a school,” said Jeannine Lalonde, the associate dean of admissions at U.Va. “I think that our students use so many factors when it comes to making their final decision.”

But it turns out athletic success can tend to be one of those factors.

“The exposure, especially national exposure” generated by national TV and other attention, “especially when they win the championship, there’s a noticeable increase in the number of applications that that university ends up receiving, particularly from out of state students,” said Kyle Judah, who published a study on the impact college sports can have on university admissions in the Journal of Sport Administration and Supervision.

“It allows the university to actually step the bar up in terms of their selectivity of students too,” he added. “I was able to see that there was an increase in the incoming GPA and SAT scores of the students that were admitted the year following an NCAA championship by a Division 1 school.”

A subsequent study from a Harvard Business School professor found that athletic success might be more of a lure for students with a lower academic profile, it still matters to those who have better qualifications.

But she admitted that students visiting during some college fairs this week have shown enthusiasm for what happened Monday night, and Judah said it’ll start to become apparent later this fall.

“We saw those bumps at the University of North Carolina, the University of Florida,” said Judah. “Even those schools that are big state flagships that have national brand recognition, we’re still able to see about a 7 percent bump that could be easily attributable to that increased exposure.”

In dollar figures, he said, that translates into “somewhere in the range of $3 million to $5 million of additional revenue, between application fees and student tuition to large state universities, that ended up winning NCAA championships.” 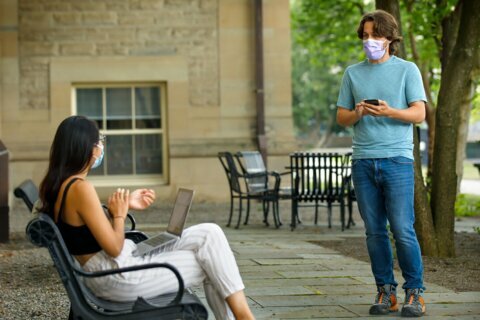