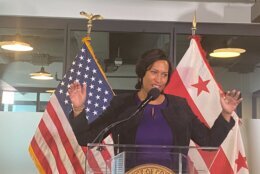 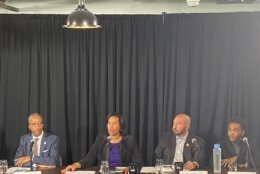 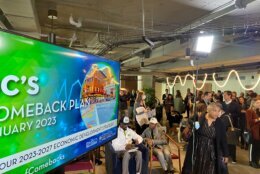 The pandemic cost the District in several ways — loss of life, jobs and residents.

On Monday, Bowser gathered with other political and business leaders inside a flexible workspace downtown to unveil a long list of goals that touch on all aspects of life in the city — from downtown to more economically challenged neighborhoods.

“Our first goal will be to add 35,000 new jobs in high-growth target sectors,” Bowser said. Those sectors include education and research, communications and design, consulting, hospitality, tourism and entertainment, life sciences and health, and technology.

Bowser also touched on the fact that 92% of the downtown area is made up of commercial business. In the next four years, she hopes to add 15,000 new residents, as the city strives to become the home of 725,000 people.

“One of the lessons we learned during the pandemic is that mixed-use communities are more resilient in the face of adversity,” Bowser said. “We know we need a better balance. Let’s be clear, however — the downtown was the economic engine of our city, and our city will rely on our ability to find new ways to use these spaces, to build these spaces, and to bring people back to a 24-7 economy.”

For emphasis, she repeated that the downtown would need to evolve while also touting that the city is already growing again.

“I don’t know where they all went, but I can tell you … they’re coming back,” Bowser said to an applauding audience. “The last census update shows that we had 3,000 newer residents, and our schools population data is the largest since we started recording it in 2007.”

She called it proof that younger families are coming back, which is in line with the population the city is hoping to convince to move into D.C.’s borders.

“Growing the population will require a focus on a particular age group — the 20s to 34 — which accounted for a substantial part of our out-migration in the last few years,” Bowser said. “Reversing those trends and keeping people in D.C. has to be our focus.”

To do that, Bowser said the city is working with Events DC to come up with an ad campaign aimed at luring remote workers whose jobs allow them to live anywhere they want to.

“For example, you may be living in California because you work for a California company. Now your company says you can live anywhere. We’re targeting those workers to live in D.C.”  Bowser said.

The city is not planning to incentivize relocation the way other cities have at this point, but it hasn’t entirely been ruled out either. “We’re open,” Bowser said.

Bowser also touched on an effort to boost the number of minority-owned businesses, as well as the income of Black households in D.C. by lifting the median income of Black residents by $25,000.

Other priorities include increased opportunities in low-income neighborhoods, especially as it pertains to grocery stores. In particular, one goal is to make sure that all residents in Wards 7 and 8 live within a mile of a grocery store. Improving broadband internet access will also be a priority.