A crowd at Breadsoda cheered on Patrick Curran, a resident of D.C.'s Glover Park neighborhood, as he made his third appearance on the TV show ‘Jeopardy!’ on Monday.
Listen now to WTOP News WTOP.com | Alexa | Google Home | WTOP App | 103.5 FM
(1/3) 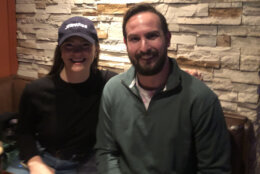 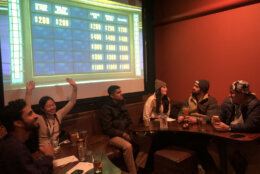 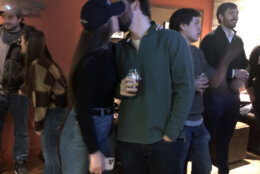 A cheering crowd turned out Monday night for Trivia Night at Breadsoda — a bar and restaurant in D.C.’s Glover Park neighborhood. One of their own, Patrick Curran, a resident of the neighborhood, was making his third appearance on the show “Jeopardy!” and all the TVs were tuned to the half-hour game show.

“You really don’t get any higher than ‘Jeopardy!’ and he’s a regular player here every Monday night,” said Christian Hunt of D.C., the host of Monday Night Trivia at Breadsoda, which is in its eighth year.

“Without giving away too much, I can promise it will be another good game, we got some tough competition,” said Curran, who taped the episode in November.

The “Jeopardy!” jingle could be heard above the bar buzz and the crack of the balls on the pool tables. Cheers went up as neighborhood trivia players watched their hero jump to an early lead in the third round after notching up winnings of more than $45,000 in the first two rounds.

Curran stood nursing a drink, surrounded by his supporters as the crowd watched him falter on the televised third round. A well-timed Daily Double win by his opponent sealed his fate.

“I’m happy with the way I played the game. I think I played a solid game, Conner was quick on the buzzer,” Curran said about his winning opponent.

But the third round loss did not dampen anyone’s enthusiasm.

It’s a big leap from Monday night bar trivia to TV’s “Jeopardy!” but Curran thinks any trivia player who has dreamed about being on “Jeopardy!” ought to give it a shot.

“I would just encourage everybody to get out there and take the test,” said Curran. “It’s online, its free, anybody can do it and you never know when you’re going to get the call.”