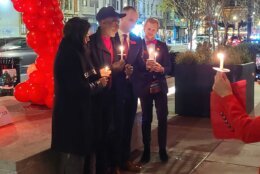 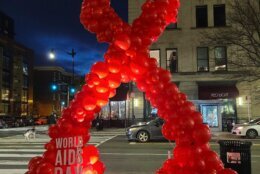 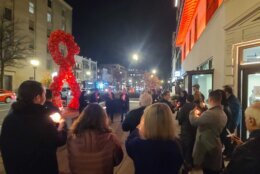 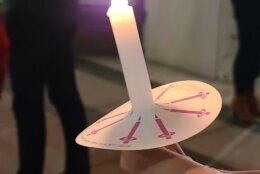 A giant HIV/AIDS awareness ribbon made of red balloons fluttered gently in the evening breeze Thursday as Whitman-Walker Health observed World AIDS Day 2022 with a candlelight vigil in Northwest, D.C.

Since 1988, World AIDS Day has been observed on Dec. 1 to show support for people living with HIV. It also honors those who have died from the disease. Whitman-Walker Health (WWH) has been at the forefront of the fight against HIV/AIDS and the stigma associated with a diagnosis from the beginning of the epidemic.

With four locations in the District, WWH is a nonprofit community health center with a special expertise in HIV/AIDS healthcare and LGBTQ+ health care. It has expanded services to include primary health care, gender-affirming care, dental and behavioral health services.

Dr. Randy Pumphrey, senior director of Behavioral Health at WWH, said he remembers the early days of the epidemic when very little was known about HIV. It didn’t even have a name yet. A friend who was an epidemiologist wrote to Pumphrey, warning him about a disease she was studying that was killing gay men in San Francisco and New York, and she urged him to be very careful.

“I remember that being such an ominous moment,” Pumphrey said, “because suddenly, I realized that we had already been living with discrimination and stigma, and now there was this other thing, and what would it mean?”

Today, Pumphrey said, the advances in treatment and technology have helped ease some of the stigma associated with an HIV diagnosis.

“If I’m personally living with HIV, and I’m adherent to my treatment, and my viral load is undetectable, then I can feel safe having sex with someone and not transmitting HIV to them,” Pumphrey said.

“And that’s a really significant thing, because it empowers both people, and it lowers that stigma barrier.”

Maurisa Turner-Potts works in public relations services to WWH, which provided treatment to her brother when he was living with HIV.

“My brother passed away in 2009 from HIV/AIDS,” Turner-Potts said. “It was during a time, as a Black male, that it was tough to not only recognize that you’re gay, but also living with HIV.”

Turner-Potts said her brother credited WWH for prolonging his life, providing the care he needed to live with HIV/AIDS for 22 years. She now sees her professional service to WWH and her attendance at the World AIDS Day vigil as ways to both professionally and personally honors her brother.

But the medical research and new treatments and technologies are helping to bring down those numbers. UNAIDS estimated 1.7 million AIDS-related deaths in 2006. In 2020, the number was less than half that, 690,000.

“I had friends who were about to die, who did not die and are still alive today, because of those discoveries. And that’s a powerful thing,” Pumphrey said.

Turner-Potts’ brother was diagnosed during the mid-1980s, during the time when stigma surrounding HIV/AIDS was still strong, and so she’s grateful that he was able to live his life for 22 years with the disease.

“Fast forward to now, there’s so much advancement in treatment and options for those living with this disease,” she said. “And I think it’s really important to share that people are living their full life.”

The majority of people dying from AIDS-related illness are in underdeveloped countries, where access to the new treatments is far more limited. Pumphrey said he thinks it is the mission of everyone “to reach out to human beings who are in less-privileged places to help them have access to these resources.”

The ultimate weapon against HIV/AIDS is a vaccine to stop the virus in its tracks, something which to date has been elusive.

On this World AIDS Day 2022, the journal Science published early clinical trial results for an HIV vaccine candidate that induced an immune response in a small group of volunteers. The study’s authors say the Phase I clinical trial triggered broadly neutralizing antibodies in 97% of vaccine recipients. Further study and testing will determine how long the antibodies induced by the vaccine can last.

About the possibility of an effective HIV vaccine, Pumphrey said “I live in hope.”