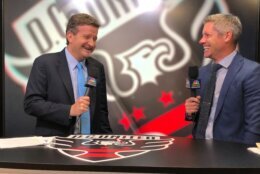 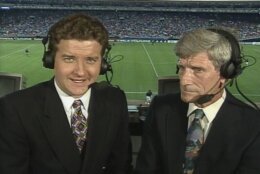 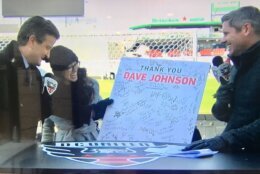 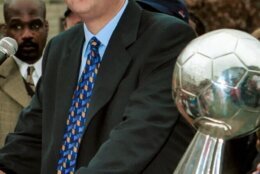 For 27 seasons, WTOP sports director Dave Johnson has been a voice who has excited D.C. United fans with one phrase: “It’s in the net!”

Sunday though will mark the end of the era as Johnson, 58, calls his last game as the team’s TV play-by-play broadcaster.

Johnson said as he concludes his broadcasting duties for now, he’s grateful for his time calling the games.

“I’ve been so blessed,” Johnson said.

He steps away from the broadcast booth after Major League Soccer announced Apple will bring the league’s games to Apple TV with new broadcast teams in a 10-year deal.

Seeing professional soccer succeed in D.C. has been Johnson’s dream, dating back to the days of sitting in the stands with his parents watching the Washington Diplomats play.

Johnson lost his mother to multiple sclerosis in 1979, an illness he now is fighting himself. He recalls that one of his mother’s last good days was spent at a Diplomats game. The team folded in the early 1980s.

“I vowed that one day if I ever had an opportunity, I would like to be involved in the sport and make a difference,” he said.

Johnson said in 1995, when D.C. United began, there was a lot of uncertainty about what the future held for the team or professional soccer in D.C. in general, then titles started being won and the crowds started showing up. Then the team would move from RFK Stadium into its own new stadium — Audi Field, which is steps away from Nationals Park.

“I can’t wait to see what’s next because I do believe the best is yet to come,” Johnson said. “This country is hosting a World Cup in a few years.”

Johnson said that he could spend hours sharing the fond memories, but what resonates with him the most are the connections he has made along the way, including with supporters who have been there from the start and now have kids who are all grown up. It makes him “feel old,” he said jokingly.

“Championships and goals and all that stuff is great. But you can’t put a measure on what the connections have meant,” Johnson said.

Johnson has been arguably one of the busiest men in D.C. sports, juggling the team’s games with his duties as the radio broadcast voice of the Washington Wizards, which he has done since 1995. Many times, late-night games would be followed by waking up before dawn to report on the games he called the night before for WTOP.

A Gambrills, Maryland, native, Johnson has been a common face around TV news desks, as well, doing sports for FOX 5 and more recently NBC Washington.

Johnson said the energy he needs comes from those who support him and the teams, especially the stadiums or arenas packed with excited fans.

“And that’s why I’m able to juggle so many things because this is what I wanted from the time as long as I can remember, “Johnson said. “So, I’m still a kid.”

With his multiple sclerosis diagnosis, Johnson also saw the team and fans rally behind him. That included the creation of “IT’S IN THE NET!” T-shirts, of which a portion of the proceeds goes to the National Multiple Sclerosis Society.

Johnson said D.C. United could keep him around for some other sort of play-by-play role, but no decisions have been made on that.

“I hope to continue in some capacity, or you know, I’d gladly take tickets and thank people as they come in because, again, I’ve been so blessed,” Johnson said.