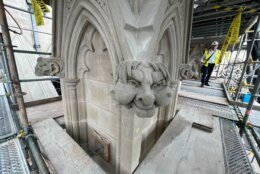 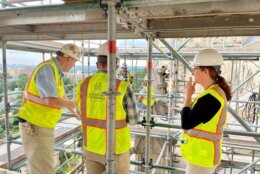 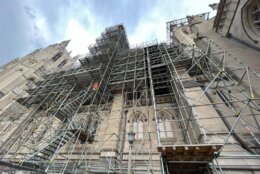 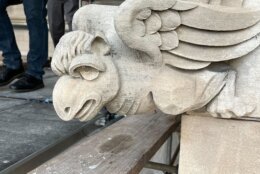 The Washington National Cathedral is still working on repairs following the region’s 2011 earthquake that caused nearly $40 million in damage to the iconic structure, but a fundraising effort is giving the project a financial boost.

The cathedral is in the process of raising a goal of $150 million through a campaign it calls “A Cathedral for the Future.”

It has already raised $115 million and the cathedral expects the rest to come over the next two years. It will be enough money to pay for the rest of the earthquake repairs, among other things.

“This is the culmination of an effort to restore the cathedral’s defining features and expand our mission in service to the community,” said the Very Rev. Randolph Marshall Hollerith, dean of the cathedral.

“This is painstaking, difficult and precise work,” said Joe Alonso, the cathedral’s head stone mason. “We’ve been literally chipping away at it for the last 11 years and we’re a little more than halfway done.”

Alonso said when the earthquake hit, he and his team were “flabbergasted by the damage.”

“We’ve got the work broken up into phases now,” Alonso explained.

Another project that will be funded through the campaign is a major renovation of the cathedral’s pipe organ, which was first installed in 1938.

“The renovation will address the breakdown of the instrument over nearly a century of service and will consist of maintaining key original elements of the organ while adding newer parts,” the cathedral said in a statement.

The fundraising made it possible to open the cathedral’s “Virginia Mae Center,” a fully renovated 30,000-square-foot pilgrimage and retreat center. It will host events for people of all faiths to explore art, music and spiritual formation as well as issues of social and racial justice.

“With the funding provided by this effort, the cathedral will ensure the ability to serve as a sacred space and gathering place for all people in new and exciting ways,” Hollerith said.