In a shaded park on the banks of the Anacostia River, more than 20 D.C. violence interrupters received training Wednesday afternoon from a combat-experienced trauma surgeon on how to save a life before the ambulance arrives.

Then, with an aide, he used the tools to demonstrate methods to stop severe bleeding from gunshots and stabbings.


Foam cylinders with round and diagonal indentations encircled in red were used to demonstrate various wounds. The violence interrupters were taught how to recognize life-threatening bleeding, pack a wound, provide pressure and apply a tourniquet.

Wallace is an active-duty Navy surgeon who’s served for 14 years, including a six-month deployment to Afghanistan.

“One thing I’ve appreciated in the year-and-a-half or so that I’ve been over at Hospital Center is that some Friday and Saturday nights here in D.C. can be just as violent as it was in Afghanistan. There’s a lot of shootings and a lot of stabbings, and there’s a lot of young people that are having bad outcomes because they’re losing a lot of blood before they get to the hospital,” Wallace told the violence interrupters.

“Our goal is to get the ‘Stop the Bleed’ kits to all of the front-line peacekeepers,” said Lashonia Thompson-El, executive director of Peace for DC — a private foundation that helped organize the training session in conjunction with MedStar.

” A couple of people said I don’t feel like I’m ready for that, and I said it could happen whether you’re ready or not,” Thompson-El said. 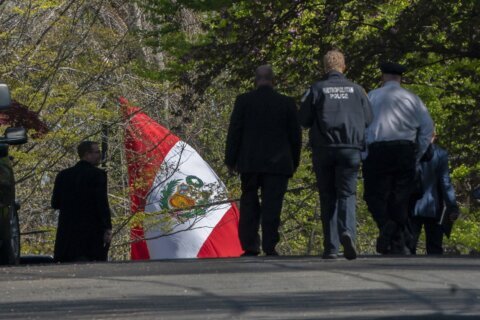