A DC woman’s memories of the 1963 March on Washington

Among the several hundred thousand people who attended the March on Washington, on Aug. 28, 1963, is a Washington woman who says she can remember where she stood to hear Martin Luther King Jr. and other civil rights leaders speak.
Listen now to WTOP News WTOP.com | Alexa | Google Home | WTOP App | 103.5 FM
download audio
Listen to Sandy Kozel's interview with Donella Brockington.

Among the several hundred thousand people who attended the March on Washington, on Aug. 28, 1963, is a Washington woman who says she can remember where she stood to hear Martin Luther King Jr. and other civil rights leaders speak.

Even though Donella Brockington was just 10 years old at the time, she recalls details of the march she attended with her mother, Harriet.

“My mother took me. She was adamant that she go and thought it would be a great idea for me to go with her. And I loved tagging along with her,” Brockington said. “[She said] it was going to be a historic moment, and she needed to be there in person.”

As a child, she only partially realized the significance the event would hold.

“I knew I was going to hear Dr. Martin Luther King, and I knew about him. I had no idea about the impact he would have on a crowd that size, but I had some expectations.”

Brockington told WTOP that even at 10 years old, it didn’t take long for it all to sink in, especially when she saw how many people were there.

“I knew at that point that I was actually part of some very important moment in history,” she said.

Being a child had one advantage — it allowed Brockington and her mother to inch their way toward a better view of the speakers at the Lincoln Memorial.

“People were pretty nice about letting us move forward, since they knew, you know, clearly I couldn’t see above the crowd, and my mother wasn’t much taller than me. So we kind of worked our way toward the front. We found a vantage point where we could actually see the stage,” Brockington said.

That also meant being able to hear the speeches.

She and her late mother, Harriet Brockington, who died in 2012, often shared their memories of that event and others. They attended the 25th anniversary of the march together in 1988.

“My mother was the person who just felt like if she could be, she would be always want to be a part of history. And so any major historical occasion in the city, she was there,” she said. “My mother went to the Million Man March because she said, I just need to see it for my own eye.”

Brockington said she continued to follow Dr. King over the years. She was in high school when he was assassinated.

The history of the civil rights movement started for her after having been at that march, “experiencing history as it unfolded and then understanding that this was a major turning point in our country,” she said.

Although the Lincoln Memorial is a tourist stop in D.C., Brockington thinks of it as much more. She says she cannot visit it without thinking of that August day in 1963.

“I can point out where I think we stood,” Brockington said.

When she takes out-of-town friends to see the memorial, it all comes flooding back.

“Every single time I am in the area, it always comes to mind that I was there in 1963 for the original March on Washington,” she said.

“I tell my nieces and nephews and godchildren about it all the time. They are all aware that I was there.” 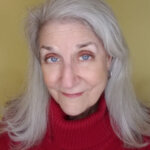