Upgrade for often-flooded Tidal Basin path is in the works

The National Park Service is looking to solve that issue for generations to come. They've started planning for the first phase of a proposed project to repair the seawalls and pathway around the Tidal Basin and West Potomac Park.
Listen now to WTOP News WTOP.com | Alexa | Google Home | WTOP App | 103.5 FM

If you walk around the Tidal Basin regularly, you probably have noticed flooded pathways, especially on the west side and near the Thomas Jefferson Memorial.

The National Park Service is looking to solve that issue for generations to come. They’ve started planning for the first phase of a proposed project to repair the seawalls and pathway around the Tidal Basin and West Potomac Park.

“It is settling at the same time that the levels of the Tidal Basin are rising,” said Mike Litterst, with the National Park Service. “So we’re dealing with water that’s four feet higher now than when portions of that seawall were originally constructed 75 years ago.”

Visitors to the basin often have to walk through puddles and flooded walkways, especially in the area just to the west of the Thomas Jefferson Memorial and near the Franklin Delano Roosevelt Memorial.

“If it’s not addressed, obviously, the seawall itself will continue to crumble. You get that wave action against the sea walls all day, every day. That’s undercutting the structural integrity of the walls,” said Litterst.

Parts of that failing seawall near the inlet bridge, and part of the West Potomac Park seawall, will be reconstructed using modern concrete and stone veneer. They will, where possible, use the original stone masonry. The sidewall along the Tidal Basin will be replaced and regraded as well.

“We want to make sure that 25, 50, 75 years from now, we’re not dealing with the with the same issue again. And we want to deal with some of the traffic flow issues,” said Litterst. “If you’ve ever been around the Tidal Basin during peak bloom, those paths that were constructed 75 years ago — there’s a few more people down there now than there were in the in the 1930s and ’40s.”

The project will be funded by the Great American Outdoors Act. They have awarded a $5.7 million contract to begin the planning and design process. 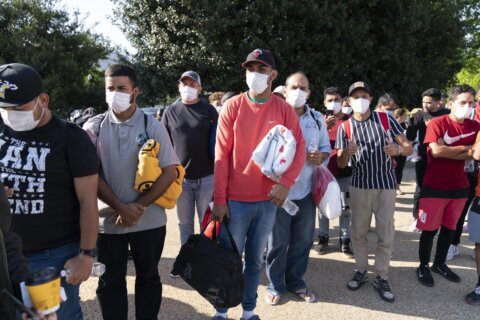