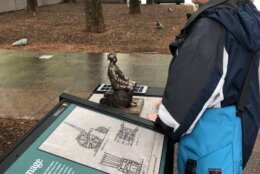 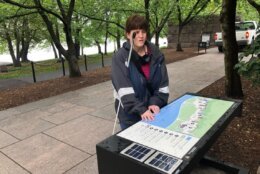 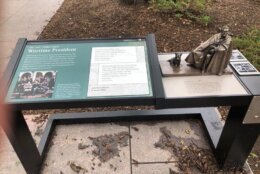 The Franklin Delano Roosevelt Memorial in D.C., has implemented significant changes to increase accessibility and inclusion for its blind and low-vision visitors. But a blind accessibly consultant says more needs to be done.

Coinciding with the 32nd anniversary of the Americans with Disabilities Act, the FDR Memorial Legacy Committee released an update on Monday to a report from last May on accessibility challenges at the memorial.

Some of the issues highlighted in the 2021 report were inadequate safety conditions and Braille exhibit descriptions that were difficult to read due to size, or placement.

Cheryl Fogle-Hatch, founder of MuseumSenses, was tapped by the committee to author the report. Fogle-Hatch, who is blind, walked the memorial first in 2021, and then again in 2022, recording observations from a blind person’s perspective.

“People always think access is an afterthought,” she told WTOP. “And it’s thought [that] you should put in your design.”

Fogle-Hatch’s observations led to the implementations of several “waysides,” which are large signs or panels for the visually impaired, audio buttons, as well as several tactile models of exhibits and maps to help orient blind visitors.

Some Braille that was originally too large or placed too high to be touched by blind visitors has now been notated in the wayside signs.

“Bringing [the Braille quotes] … down at a lower level, onto the wayside exhibits, where if you read Braille by touch, you can read them,” Fogle-Hatch said.

These changes to the memorial mark the latest improvements in disability access and inclusion, following the 2001 installment of a statue depicting Franklin Delano Roosevelt in a wheelchair.

Fogle-Hatch said she is pleased with the improvements, but more should be done.

In the future, Fogle-Hatch said she would love for Bluetooth functionality to be incorporated into audio elements at the exhibit, as well as written indications on which Braille elements are decorative instead of functional, to bring visibility to the need for increased disability access.

“These things are slow,” Fogle-Hatch said, noting that most museum exhibits need to be retrofitted for disability access, as the FDR Memorial was 25 years after its initial installation.