‘Enough is enough’: March for Our Lives demonstrators call for action against gun violence

The March for Our Lives took to the streets of the nation's capital again Saturday afternoon, spurred by recent mass shootings the youth-led group sees as emblematic of a worsening gun violence epidemic — and insufficient action to address it.
Listen now to WTOP News WTOP.com | Alexa | Google Home | WTOP App | 103.5 FM

The March for Our Lives took to the streets of the nation’s capital again Saturday afternoon, spurred by recent mass shootings the youth-led group sees as emblematic of a worsening gun violence epidemic — and insufficient action to address it.

Saturday’s rally on the National Mall, north of the Washington Monument, served as a sequel to the 2018 gathering that saw hundreds of thousands fill D.C.’s Pennsylvania and Constitution avenues for stricter gun control. Four years ago, Parkland, Florida, was the epicenter of a national tragedy that moved survivors of gun violence to organize.

This time, it was Uvalde, Texas.

“If we can agree that killing children is unacceptable, then we need to either prevent people intent on killing from getting their hands on the guns they use or stop their intent to kill in the first place,” Parkland shooting survivor David Hogg said in an opinion piece published by Fox News on Friday. “No law is perfect, but if we focus on stopping the process of radicalization to violence, we can reduce gun deaths by half over the next decade. And we need to act now.”

As Hogg spoke Saturday, one counterprotester walked in with a sign reading “Guns and Bacon” on one side, and “Gun Control” crossed out on the other. People encircled him and drowned him out before he was escorted away by security, WTOP’s Alejandro Alvarez reported from the march.

A lone counterprotester walked in during Hogg’s speech with a sign reading “guns and bacon” on one side and “gun control” crossed out on the other. People encircled and drowned him out before he was escorted away by police (that’s the chanting you can hear in the first video). pic.twitter.com/6gdHyaYgT0

In the District, thousands of rallygoers stood with family members of Uvalde and Buffalo shooting victims alongside Parkland survivors, members of Congress, educators and social activists.

Kathleen Gabriel, a teacher from Arlington Heights, Illinois, who also attended the first March for Our Lives four years ago, said she agreed with Hogg’s viewpoint.

“Twice a year, we have to do Code Red drills — we see the trauma that it’s causing students and we still don’t have anything in action that could have averted the Uvalde shooting,” Gabriel said. “No, I don’t think enough has been done, and I’m heartbroken.”

During the original 2018 march, Gabriel wore a banner with 130 names on it to commemorate the victims of the most prolific school shootings since the Columbine High School shooting. On Saturday, her updated banner had 177 names on it — including children killed in Uvalde.

On the National Mall ahead of the second March for Our Lives, white and orange flowers form a sprawling memorial commissioned by Gabby Giffords. A sign explains there are around 45,000 flowers here, marking the number of Americans who die annually from gun violence. pic.twitter.com/oSIO4AZqWl

Another teacher, Zoe Smith, spoke with WTOP’s Valerie Bonk about how she is being rooted on by her colleagues back in her home state of Michigan.

Carrie Powers, who works as a teacher and administrator in Boston, Massachusetts, said she was afraid “because you don’t know if our school is going to be next.”

Recent high school graduate Kaylee Dusetzina, from Pennsylvania, shared how grateful her family was that she had completed her time in school safely.

“My mom texted me the last week before I graduated, and was like, ‘I’m so happy you’re graduating next week. I can’t imagine you going through another year of this.'”

D.C. Mayor Muriel Bowser was among the speakers at the march. 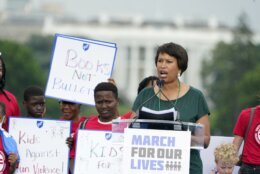 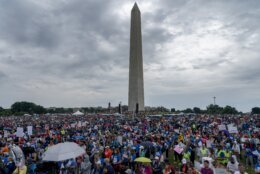 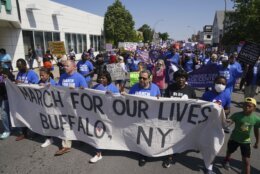 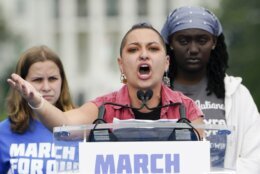 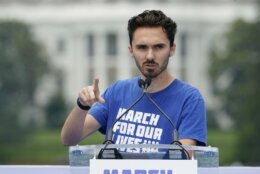 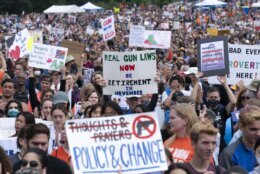 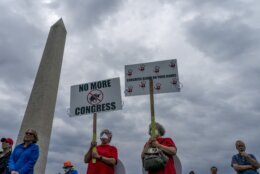 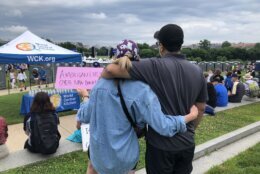 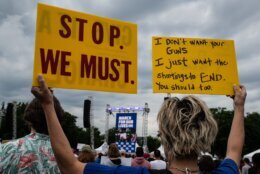 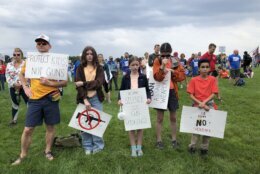 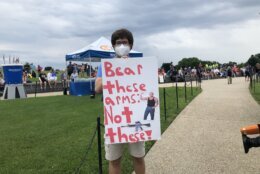 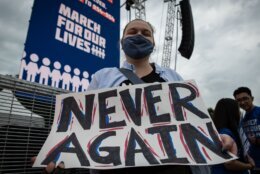 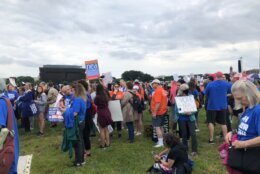 There was a brief incident during the speeches where a man jumped the barricades on the main stage and threw something. His actions sent the crowd into a brief panic, but he was quickly arrested and led away by U.S. Park Police and U.S. Secret Service officers.

While I was uploading ^ that video, a man jumped the barricades at the MFOL stage, threw something and sent the crowd into a panic until an organizer calmed people. Park police arrested him. Incident lasted less than a minute but scared the hell out of everyone here. pic.twitter.com/leFr7SZl5k

Much like its predecessor, Saturday’s rally picked up from a wave of school walkouts and other student-led actions in the D.C. region. Students Demand Action, the youth wing of the nonprofit Everytown for Gun Safety, encouraged students to walk out of classes in late May and early June to pressure lawmakers. “We can’t live and die like this. Thoughts and prayers mean nothing from politicians who choose guns over our lives,” it said.

Manuel Oliver, whose son Joaquin was killed in Parkland, picked up on that momentum Saturday by calling for a nationwide school strike — pleading for students present to refrain from attending classes “until our leaders stop avoiding the gun violence crisis.”

On Monday, high school students donned bulletproof vest covers during a rally against gun violence in view of the U.S. Capitol. People heading to the Mall on Saturday witnessed thousands of flowers set out in a grid, marking deaths attributed to gun violence — the final day of a weeklong memorial resembling a display for COVID-19 victims last summer.

“Right now, we are angry,” March For Our Lives board member Mariah Cooley told The Associated Press. “This will be a demonstration to show that us as Americans, we’re not stopping anytime soon until Congress does their jobs. And if not, we’ll be voting them out.”

The second March for Our Lives took place concurrently with hundreds of sister rallies planned across the country. A map on the group’s website showed more than 450 events slated for Saturday afternoon at courthouses, state capitols, public parks, youth centers, malls and schools from coast to coast. Hogg also called for Americans abroad to demonstrate outside U.S. embassies and consulates.

Minors among those killed, injured in string of DC shootings