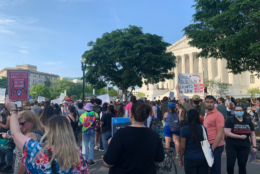 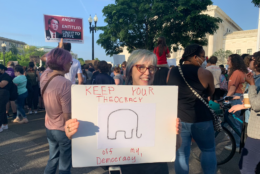 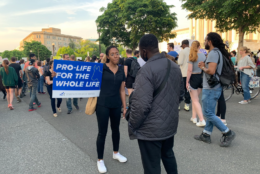 One abortion opponent, identified as S., said the issue is about the “sanctity of life.”

Meanwhile, Abby Pepper, of Alexandria, Virginia, said it’s not just about abortion, but also about women’s health care and women’s safety and independence.

“We know it’s just a downward spiral from here. We’ve got gay rights on the line, birth control access on the line … We should not be making laws based on religious views,” Pepper said.

Her sign said: “Save unborn babies by keeping abortion legal,” in reference to studies she said show that countries that restrict abortion have the highest abortion rates because it creates a culture of shaming women, limiting access to birth control and contraceptives.

“Doctors are told they’ll lose their jobs if they speak about abortion or any kind of family planning. It just creates a whole culture that makes women afraid, and they don’t know how to prevent pregnancies, which then results in more unwanted pregnancies … If you want to save babies, we’ve got the data, it’s not banning abortions. That’s not the way to do it,” Pepper said.

Carrying a sign that said, “Keep your theocracy off my democracy,” Liz Enagonio, of Bowie, Maryland, remembers the Roe V. Wade decision when it came down. She said she is “distressed, distraught, irritated and furious that we are out here doing this again.”

Colin Kreiling, of Arlington, said what’s happening is “terrifying.” He said that it’s wishful thinking to hope that what’s being proposed won’t come to pass. “I think they’ve decided what they’re going to do and they’re going to do it, and there’s nothing else we can do.”

Also on Tuesday, D.C. leaders gathered at Planned Parenthood in Northeast to reaffirm their support for reproductive choice. They called on Congress to pass a law affirming Roe’s protections, and pointed out the unique position of the District’s 750,000 residents who lack congressional representation.

Though past efforts have failed, Senate Majority Leader Chuck Schumer said he intended to hold a vote on a legislation that codifies Roe, which, if adopted, President Joe Biden said he will work to pass and sign into law, The Associated Press reported.