Mayor Muriel Bowser held a ceremonial bond signing for a first-in-the-nation public-private partnership to pay to upgrade street lighting with energy-efficient LED technology. She also showcased work to replace lead pipes and emphasized the need to reconnect communities that have been cut off from jobs, food and opportunities by highways running through them.

The latter was evident at the Minnesota Avenue Metro Station, where the Parkside Pedestrian Bridge now offers residents a path between communities across Interstate 295 that is well lighted, equipped with security cameras and Americans with Disabilities Act accessible.

“This bridge was supposed to be done in early January of 2022,” said Dawit Muluneh, chief engineer for D.C.’s Department of Transportation. “We got it done in September of 2021, and we also got it done under budget.”

Residents were happy with the bridge, compared to other crossings.

“This was highly needed,” said Kendrick Chase, of Southeast. He used the bridge for the first time Wednesday after arriving at the Metro station on his way to a doctor’s appointment on the other side of I-295.

Noting that the bridge had ramps in addition to steps, he said, “I think it’s wonderful for bikers and whoever else.” The bridge was used by cyclists, a man in a wheelchair and families pushing baby strollers.

Although Muluneh said the pedestrian bridge was fully funded by the city, money from the Federal Highway Administration’s bridge program is helping D.C. upgrade its bridge network citywide.

“The Bipartisan Infrastructure Law will rebuild roads and bridges, replace lead pipes, help provide high-speed internet to every family in America, deliver cheaper and cleaner energy to households and businesses, and produce concrete results that change people’s lives for the better, including right here in nation’s capital,” he said.

On a tour of some of the projects in Ward 7 led by Bowser, Landrieu visited a project outside a home where lead service lines were being replaced by D.C. Water.

“This infusion of federal funding will allow us to greatly expand and accelerate the work we are doing to rid our neighborhoods of lead service lines, employ District residents and ensure everyone has equitable access to clean water,” David L. Gadis, CEO & General Manager at DC Water, said in a news release. 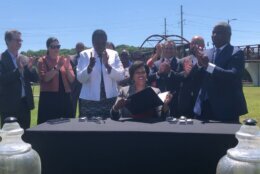 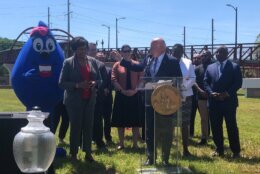 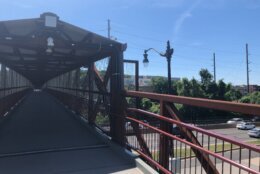 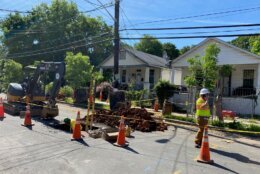