If D.C. Mayor Muriel Bowser has her way, though, the Frederick Douglass Memorial Bridge over the river will soon connect not just cars, but communities.

“We have a beautiful looking city,” said Bowser in Southwest. “Look at our bridge. Isn’t she lovely?”

On Buzzard Point, Bowser touted The Stacks, a mixed-use development that’ll result in about 1,100 homes right across the street from Audi Field.

“There’s going to be more Washingtonians, and more opportunities for Washingtonians,” she told the audience gathered at the construction site on First and T streets SW. “We are continuing … to reengage this beautiful river that helps to make D.C. so special, but has been too long neglected in our plans.”

Minutes later, she was at a groundbreaking ceremony for The Douglass, which will build 750 units at Howard Road and South Capitol Street SE between the Anacostia Metro station and the Anacostia River, part of a broader complex renamed The Bridge District.

“What we need to do is show people that it’s just as vibrant on this river as it is on the Potomac,” said John Falcicchio, D.C.’s deputy mayor for economic development. “These two projects are just about a half-mile away from one another. A river divides them. But what we’re going to do is have the exact same amenities on both sides of the river.” 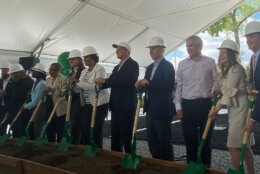 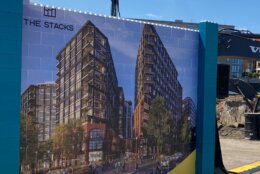 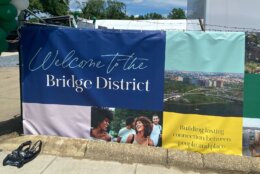 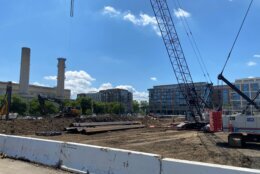 The first new retail business to sign on with The Bridge District is The Sandlots, which started as a temporary hangout spot near Nationals Park. Since then, it’s popped up in other temporary locations around the District.

This will be its first permanent home, and Falcicchio said it’s one of the reasons he envisions crowds flocking to the development in Southeast D.C. before sporting events, the same way they do around venues right next to Nationals Park and Audi Field.

“Folks can go from here at Sandlot Anacostia over the Frederick Douglass Memorial Bridge. They can go to a Nats game, they can go to Audi Field and they can have a good time,” he said. “What that means is, we’re actually bringing dollars to Ward 8.”