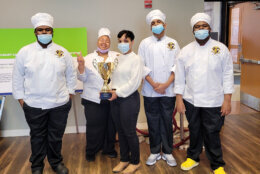 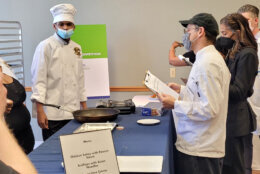 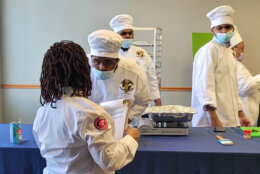 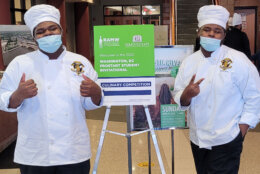 A national culinary competition that showcases the best of the best student chefs will include a D.C. high school.

The Ballou High School team of four cooked a five-star Asian-inspired cuisine at the Prostart DC Invitational on March 29. And next, they will become the first D.C. high school to participate in the National ProStart Invitational in almost a decade.

It wasn’t easy earning their spot on the national stage. The team was judged on the three-course meal they presented to the judges. And in the end, their dishes came out ahead of those presented by students from Theodore Roosevelt High School.

“I was real happy when I found out were moving to the finals, but now I’m starting to feel nervous because it’s like really a big thing, it’s going to be even more people that we’re going to have to go against,” said Laynard Hairston, who was on the winning team with three others, including his twin brother, Laymont.

It took a lot of practice to get ready for local competition.

According to Laynard Hairston, the team worked on their skills for five hours a day for weeks leading up to the event. He said the practice continues leading up to the national event, as they consider the critiques given to them during the DC Invitational.

Laymont Hairston said that while they may have the normal sibling squabbles outside the classroom, he is glad he convinced his brother to join him in the culinary class at Ballou.

“When it comes to the kitchen, we’re at a whole different level,” Laymont Hairston said.

Laynard Hairston said his goal at first was to pursue football, but now he said he is considering a culinary career, as well.

“Culinary was never a choice for me, but now it is,” Laymont Hairston said.

The ProStart competition is part of the The National Restaurant Association Educational Foundation, which is focused on providing students from all backgrounds the resources needed to begin a culinary career.

The DC ProStart Invitational was organized by the Restaurant Association of Metropolitan Washington (RAMW). D.C. schools were scheduled to compete two years ago, but the pandemic hit.

“So the students and the schools have been sitting on their hands, waiting for an opportunity to get out onto the field, if you will, or into the kitchen to get out there and compete,” said Scott Attman, chairman of Educated Eats Foundation, which is a part of RAMW.

Attman said the meals put out by the students are similar to those seen in five-star restaurants, and watching the D.C. competition was exciting.

“To see them [the students] take criticism from the judges, and the team from below to read out their names and see the excitement on their faces and their teacher’s faces and their, you know, amongst each other, was really something special,” Attman said.

The national competition will take place at the Washington Hilton from May 6 to May 8.

Similar to the DC Invitational, the national competition will judge students not only on the plates they prepare but also their technique with preparing — from how they use their knife to how they follow sanitary guidelines. They also need to price their menu, as a restaurant would do.

For the students’ teacher, chef Shanel Howard, who is Ballou’s culinary arts instructor, she said she is very pleased with her team’s performance so far, and she is excited to see them present meals on a national stage.

“Whether we take home another trophy or not, the experience of learning and making those connections with other students from all around the country is a win in itself in my opinion,” Howard said.