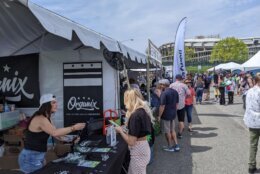 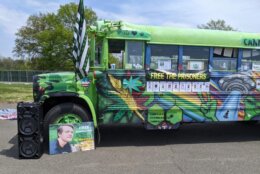 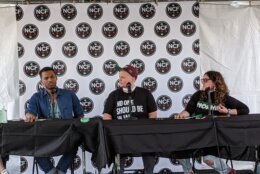 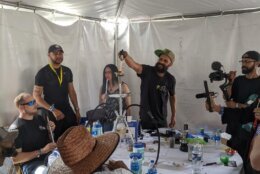 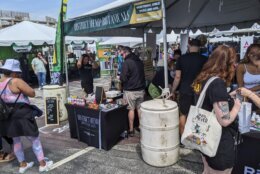 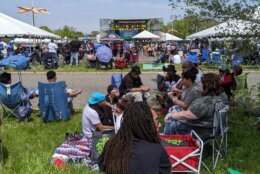 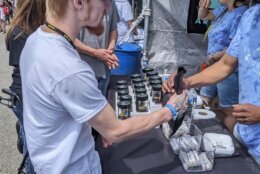 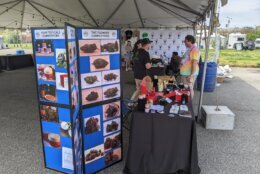 Saturday’s National Cannabis Festival at RFK Stadium was a clear celebration of all things related to the world of cannabis.

The centerpiece of the festival consisted of eight rows of vendor tents, hawking everything from clothing, accessories and artwork, to potent cannabis-infused edibles, oils, waxes and “flower,” leaving zero doubt that weed is now — in one form or another — absolutely legal to procure in D.C.

“What are you looking for?”

That was the most commonly asked question when patrons approached the dozens of vendor booths whose tables were crowded with bell jars filled with cannabis buds.

Merchants offered countless strains of pot, including everything from Wedding Cake, Girl Scout Cookie, OG Kush and Jokerz, to strains named I-495, Koko Puffs and Trufflez.

For edible fans, there were tables packed with cookies, brownies, candies, jellies and virtually anything edible that can be infused with THC.

No surprise, a combination of food trucks and carnival-style lunch vendors filled the aptly-named “Munchies Zone.”

Something of a throwback to the peace, love and music aura of decades gone by, the vibe was pure pleasure.

The pace of the crowd was leisurely — interrupted only occasionally by festival staff scurrying to solve a problem or deliver a service. Strangers greeted one another and the banter was lively, fun and friendly.

Heck, there was even a Senior Zone tent set aside exclusively for the elderly in attendance.

But alongside the joy, pleasure and positivity at the festival, was the awareness that there is a difficult road ahead, before — and most likely after — the plant and its various forms become fully legal in the U.S.

Inside the Festival Veterans Lounge, those who have served in the military over the past two decades discussed the need for widespread acceptance of cannabis use by soldiers being treated for everything from pain relief and insomnia to PTSD.

Hosted by two mission-focused nonprofits — the Iraq and Afghanistan Veterans of America and Balanced Veterans — the lounge served as an informal retreat from the hustle and bustle. But inside the tent, the conversation focused on the need for expanded services and widespread acceptance that cannabis is, indeed, a viable treatment for these individuals.

Within the Festival’s Policy Pavilions, the conversations spanned the gamut, covering issues such as preserving cultures, passage of common sense legislation, the roles of federal and local regulatory agencies and the shifting attitudes of law enforcement.

But, of course, the two most pressing topics focused on the future of ultimate legalization and the continuing need for social equity. This theme was prevalent throughout the festival, from  vendor booths and branded vehicles, to installations dedicated to the cause of tens of thousands of individuals presently incarcerated for actions that are no longer crimes.

At the end of the day, one might likely consider the National Cannabis Festival bittersweet. Fun, carefree and enjoyable, but encumbered with understanding that there is still much work to be done.