‘We’ve got our man’: Suspect charged with 1st-degree murder in string of attacks on homeless men in DC, NY

The D.C. man suspected of shooting five homeless men in the District and New York, including two fatally, has been charged with first-degree murder, officials in D.C. announced Tuesday afternoon.

“Today I am here to announce: We’ve got our man,” D.C. Police Chief Robert Contee said during a news conference Tuesday afternoon, less than 24 hours after officials from both cities held a joint news conference urging the public’s help in finding a “cold-blooded” killer.

Gerald Brevard, 30, of D.C., who is also charged with assault with intent to kill and assault with a deadly weapon in the D.C. shootings, was arrested about 2:30 a.m. Tuesday by agents with the Washington field office of the Bureau of Alcohol, Tobacco, Firearms and Explosives.

The agents were “actively surveilling” the stretch of Pennsylvania Avenue Southeast at a time of the night when the gunman was known to strike, Contee said, when they encountered Brevard and took him into custody.

Authorities said they linked the shootings targeting homeless men in D.C. and New York through the comparison of 22-caliber cartridge casings left at each scene using a national database run by the ATF.

However, police have not yet recovered a firearm. Brevard also has not yet been charged in the two attacks in New York. At a news conference earlier Tuesday, New York police officials said their investigation is still ongoing and called Brevard a “strong person of interest.”

At the D.C. news conference, Contee said of Brevard’s arrest, “I’m very confident that this is the person. We feel we have enough probable cause to charge that person with the crimes that have occurred here in the District of Columbia.”

Finding the gun used in the attacks is “an important piece, but we make cases every day when we don’t have a firearm,” Contee said.

For the first time Tuesday, police in D.C. also identified one of the victims of the attacks. Contee said Morgan Holmes, 54, was stabbed and shot to death and his body was found in a burning tent in the 400 block of New York Avenue in Northeast on March 9.

That was the third and final attack in D.C. in which Brevard is suspected.

The two men who were shot earlier this month are recovering, Contee said, declining to reveal any other information.

Contee said it was tips from the public that ultimately helped identify Brevard as the suspect, and he said officials expected to make a “payout” in the case. A $70,000 reward was offered for information leading to an arrest.

Several hours before making the arrest, an anonymous tip to D.C. police provided Brevard’s name, and later that afternoon, a photo posted on an social media account used by Brevard appeared to place him back in the District after the two shootings in New York over the weekend, Contee said.

The D.C. police chief praised the close cooperation between the New York and D.C. police departments and the assistance of the Bureau of Alcohol, Tobacco, Firearms and Explosives for helping close the case.

“This case is an example of what happens when there is good police work, science and community support,” Contee said. “It’s a demonstration of how quickly we can close homicide cases when all three of those things are working together.”

The string of attacks began in the District on March 3, when police responded to the 1100 block of New York Avenue in Northeast D.C. at about 4 a.m. for the sound of gunshots and found a man suffering gunshot wounds. He was taken to the hospital with non-life-threatening injuries. Contee said the man initially believed he’d been shot with a pellet gun during what he thought was a robbery.

The second shooting happened March 8 at about 1:20 a.m. when police responding to a shooting in the 1700 block of H Street found another man with apparent gunshot wounds.

Holmes was killed March 9; it was the most recent attack in D.C.

Contee said Tuesday a high-quality photo of Brevard that was released by police at the Monday news conference was an ATM photo taken March 9 at Union Station in D.C.

The two attacks in New York both happened early in the morning on March 12.

Police are still investigating how Brevard may have traveled to New York, but police officials there said they have surveillance photos of Brevard at Penn Station in Manhattan at 3:30 a.m. that morning.

About an hour later, a homeless man who was sleeping was shot in the forearm on King Street, about two miles away from the station. He survived the shooting.

The second shooting that day, which happened at about 6 that morning, was captured on video, NYPD Chief of Detectives James Essig told reporters.

“As you watch, you’re kind of taken aback and you’re shocked that someone could commit such a jarring act against a defenseless person,” he said.

The victim in that shooting was pronounced dead at the scene of the shooting. Police recovered five cartridge casings.

Court records show that Brevard, 30, has a number of previous felony and misdemeanor arrests in D.C. and Fairfax County, Virginia.

Brevard was arrested in Fairfax County in December 2020 and charged with burglary and abduction in connection with the assault of a woman in a Herndon hotel. He pleaded guilty in March 2021 to a reduced charge and given an 11-month sentence.

In the D.C. case, which dates to 2018, Brevard was charged with assault with a deadly weapon after police say he tried stab someone during an argument on M Street in Georgetown. He was temporarily found incompetent to stand trial and sent to St. Elizabeths Hospital for an evaluation before pleading guilty in 2019. He was sentenced to two years of probation, according to online court records.

“We said that the work to remove this man from our streets was urgent, and our communities responded,” Bowser said in a joint statement with New York City Mayor Eric Adams on Tuesday. “We know that this experience has been especially scary for our residents experiencing homelessness. Our work continues to end homelessness and ensure all residents have access to safe and affordable housing.”

In a statement Tuesday, ATF Special Agent in Charge Charlie Patterson said, “We are relieved to have this suspect in custody and off our streets. This investigation was our primary focus and we worked closely with our law enforcement partners in D.C. and New York City bringing all of our respective investigative skills and unique capabilities to this case.” 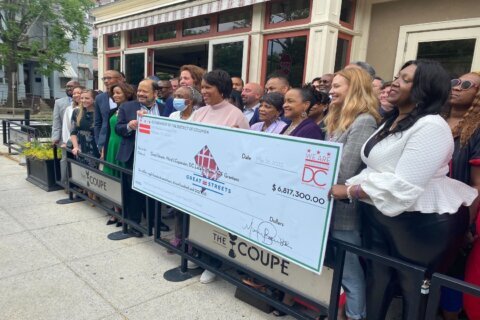