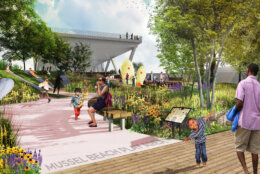 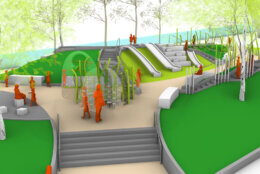 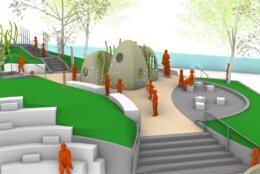 The District, in partnership with the nonprofit Building Bridges Across the River, or “Building Bridges,” has unveiled plans for an interactive “Mussel Beach” play area at the upcoming 11th Street Bridge Park in Southeast.

Located near the park’s Environmental Education Center, the Anacostia Watershed Society also plans to use the site for repopulating thousands of mussels in the Anacostia River, with the ultimate goal of improving water quality.

Work on the 11th Street Bridge Park began in Oct. 2014 after D.C. held a seven-month competition to create the design. The resulting play area was created by landscape architects OLIN and play consultants at Studio Ludo.

“We felt it was a meaningful way to teach children about river ecology and its connection to community health, while encouraging the next generation of river stewards for the Anacostia,” said Hallie Boyce, a partner at OLIN.

Boyce said their team was “thrilled” to design the interactive play area “in response to the community’s desire for places where families can gather and enjoy the outdoors.”

In 2014, the Anacostia Watershed Society conducted a pilot project to reinstall native mussels into the river. They found reintroducing the species will help pull out toxins and enhance the removal of nitrogen, which is a primary nutrient that fouls the river, according to a news release.

For example, an adult freshwater mussel can filter 10 to 20 gallons of water a day, according to a news release.

Similar efforts for repopulating mussels are also being employed in the Chesapeake Bay.

Meghan Talarowski, founder and executive director at Studio Ludo, said the project is an  “elemental key to the history and future” of the Anacostia River.

“The play area will encourage children and their caregivers to connect with the Anacostia River and residents on both sides of the river,” Talarowski said.

The 11th Street Bridge Park is expected to open by early 2025.