Ukraine supporters rally outside of the White House

"Do more for Ukraine," the crowd chanted as some of the rallygoers waved the blue and yellow horizontal-striped flags of Ukraine outside of the White House in D.C.
Listen now to WTOP News WTOP.com | Alexa | Google Home | WTOP App | 103.5 FM
(1/5) 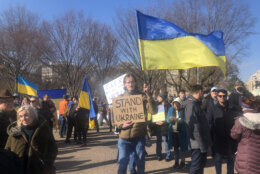 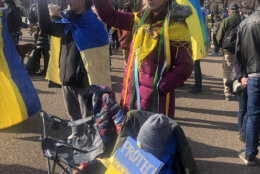 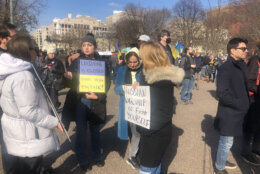 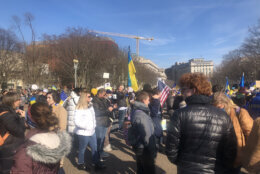 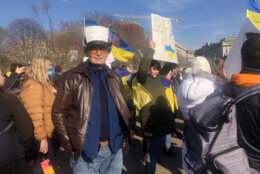 “Do more for Ukraine,” the crowd chanted as some of the rallygoers waved the blue and yellow horizontal-striped flags of Ukraine outside of the White House in D.C. on Saturday.

“We’re asking for more help, militarily, to Ukraine with arms to defend itself. We’re asking the West to close the sky around Ukraine so Ukrainians can fight,” said Yaro Hetman of the District, a leader at the rally.

“That is big news because that is exactly what Ukraine needs,” said Hetman.

“Cutting Russia from SWIFT is the most potent economic form that the U.S. can take to raise the cost to Russia,” said Hetman.

Saturday night, the U.S. and European nations agreed to impose SWIFT bans. The central bank restrictions target access to the more than $600 billion in reserves that the Kremlin has at its disposal, and are meant to block Russia’s ability to support the ruble as it plunges in value, The Associated Press reported.