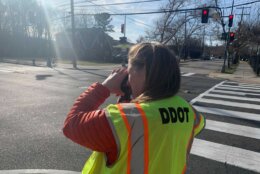 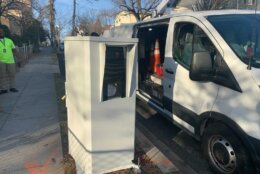 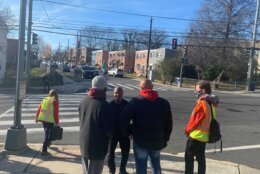 In an area where three young people have been hit by cars since October, the D.C. Department of Transportation (DDOT) on Thursday announced what it has done and what it plans to do to make the area safer.

Everett Lott, the interim director of DDOT, said two speed cameras were installed on Wheeler Road Southeast but that the safety improvements will not stop there.

“We’re going to put a median down this whole corridor to really force cars to slow down. It’s going to be one travel lane in each direction,” Lott said.

This strategy is part of a larger program that has similar street modifications planned for other roads, including portions of Connecticut Avenue in Northwest.

In addition, a loading zone for the charter school KIPP DC will also be installed to give parents a safe place to both drop off and pick up their children.

Lott said that while it is important for pedestrians to follow traffic laws, the goal of these projects is to make sure drivers are slowing down in an area where many cars go past the posted 20 mph speed limit.

“At the end of the day for those traveling in a car, the car is always going to win,” Lott said.

Lott said the median and school drop-off zone projects will be done next year, most likely starting in April, because such projects cannot begin during the winter months.

Listening to the proposed solutions was Ward 8 Council Member Trayon White, who said residents in his ward have been asking for things such as more speed bumps and school drop-off zones for years.

“For me it is a lot of talk and some of the traffic-calming measures haven’t been sufficient,” White said.

Crystal Powell both teaches and lives in the neighborhood. She said that while she is glad some safety improvements are coming, she believes more could have been done to prevent the recent tragedies.

“I don’t care how many letters we write, how many ANC meetings we go to, our voices aren’t really heard until something like this happens and it’s so unfortunate,” Powell said.

But lifelong Ward 8 resident James English is concerned the median and other roadway modifications will make matters worse because drivers will continue to drive erratically even with fewer lanes.

“Narrowing this road — it is definitely not going to do it,” English said.

English, who has a young son, said he would rather see more crossing guards for extended periods in the area and more police officers patrolling the streets and pulling over drivers not following the rules of the road.

English said he was shaken after witnessing the injuries one of two girls sustained when they were struck by a car, along with their father, in October.

Lott said additional studies of the area are ongoing and a larger plan to improve the Wheeler Road area continues to move forward.