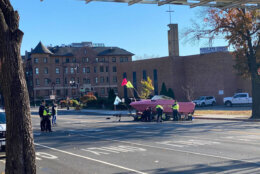 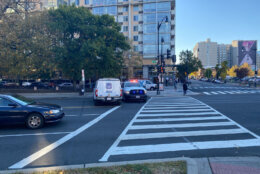 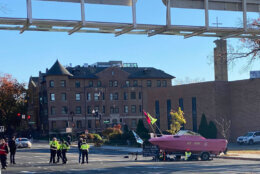 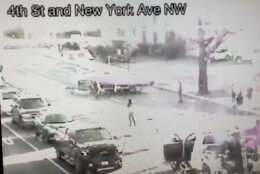 All lanes of outbound New York Avenue NW at the 3rd Street Tunnel in D.C. reopened shortly after 11 a.m. after demonstrators inside a pink boat protesting “unchecked climate change” were removed by police.

The group Extinction Rebellion said it was behind the Friday morning blockade. The group characterizes itself as a “decentralized, international and politically non-partisan movement using non-violent direct action and civil disobedience to persuade governments to act justly on the Climate and Ecological Emergency.”

The roads were reopened around 11 a.m. after the boat was removed and the protesters were taken into custody.

Earlier this morning, Extinction Rebellion’s Reilly Polka told WTOP that activists were using “a pink boat and their bodies to disrupt rush hour traffic” to bring attention to “a climate and ecological emergency.”

BREAKING: rebels are blockading one of the busiest intersections in DC to force the public to confront the true dangers of unchecked climate change. Our leaders are failing to keep us safe. Thread below. https://t.co/7NSeIFvxFk pic.twitter.com/LSKZq8qM89

“The failure of Congress to enact meaningful climate legislation and the inaction of world leaders at the recent COP26 climate summit in Glasgow are crimes against humanity, sentencing millions to hardship and death,” the group said in a statement.

“To the commuters who were inconvenienced by the disruption, we’re sorry. We believe civil disruption is necessary to force the government to wake up to the need for urgent climate action.”

The group said that while it is “sorry for the disruption” to people’s morning commute, “this is a matter of life and death.”