Hundreds of demonstrators protesting a lack of action on climate change have been arrested in D.C. this week.
Listen now to WTOP News WTOP.com | Alexa | Google Home | WTOP App | 103.5 FM
(1/6) 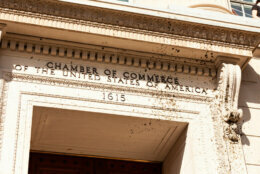 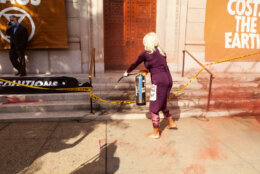 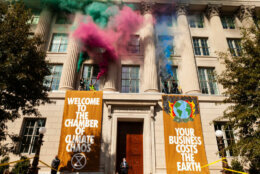 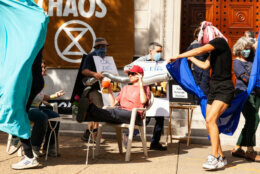 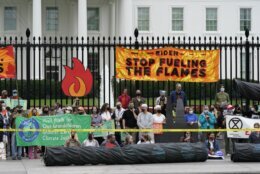 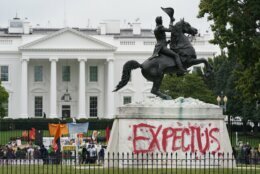 Demonstrators with climate change-focused protest groups turned out around the District Thursday, with large banners and fake oil, as part of ongoing protests against a perceived lack of action on the issue of climate change.

The Extinction Rebellion protest is one of many in a weeklong string of climate protests that have led to more than 300 arrests so far this week.

Demonstrators hoisted banners and sprayed fake oil onto the façade of the U.S. Chamber of Commerce building, which houses one of the largest lobbying groups in the United States. The banners depicted sayings, such as “Welcome to the chamber of climate chaos” and “Your business costs the Earth.”

In an ongoing wave of protests for climate action that brought the anti-Line 3 movement to Washington, activists have scaled the Chamber of Commerce for a banner drop while putting on a play showing storms being “fueled” by oil executives. pic.twitter.com/4daKwLK6ze

In a statement, the group said it wanted businesses that have made pledges to curb their environmental impact to end their association with the U.S. Chamber of Commerce, as the lobbying group has ties to major oil companies.

“[Extinction Rebellion] is calling on member companies to abandon this planet-destroying organization and stand with citizens fighting for our species’ only home. These members must quit an organization that puts corporate wealth over people’s health and destroys life on earth in the process,” said Reilly Polka, a spokesperson for the group, in a statement.

Similar protests were held at government buildings around D.C., including the Department of the Interior.

An Interior Department spokeswoman said a group of protesters rushed the lobby, injuring at least one security officer who was taken to a nearby hospital. Police and protesters clashed outside the building, and a spokesperson for the protest group accused officers of using stun guns against several unarmed protesters.

Interior Secretary Deb Haaland was not in the building at the time.

“Interior Department leadership believes strongly in respecting and upholding the right to free speech and peaceful protest,” Melissa Schwartz, a spokeswoman for Haaland, said in a statement. “Centering the voices of lawful protesters is and will continue to be an important foundation of our democracy. It is also our obligation to keep everyone safe. We will continue to do everything we can to de-escalate the situation while honoring First Amendment rights.”

Some 50 people were arrested at that protest.

Demonstrations were also held at the President Andrew Jackson statue near the White House, where a banner reading “Expect Us” — which is part of a rallying cry used by Indigenous women protesting the Line 3 oil pipeline expansion in Minnesota — was displayed.

Protesters demanded a stop to fossil fuel projects, such as the Line 3 expansion and the construction of the Dakota Access oil pipeline. Groups also called for the abolition of the Department of the Interior’s Bureau of Indian Affairs and the return of Native American lands.

WTOP’s Alejandro Alvarez and The Associated Press contributed to this report.