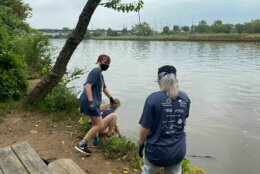 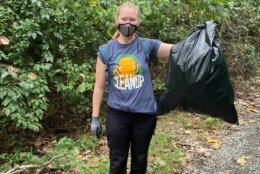 Every year, people on all seven continents gather along whatever coastal system they’re near — creaks, rivers, lakes, oceans — to help pick up trash as part of the Ocean Conservancy’s annual International Coastal Cleanup. This year, hundreds returned to D.C.’s Kingman Island to take part in the local edition of the event.

This year, the number of people walking the paths and banks of the Anacostia were smaller than usual. In 2019, more than a thousand people helped collect more than 6,000 pounds of trash. This year, there was less attention ahead of time, but no shortage of trash.

Beyond cigarette butts, “the majority of what we find are some form of food takeout or delivery — bottles, bottle caps, a lot of food wrappers, Styrofoam that breaks up into millions of little pieces and is really hard to pick up, takeout containers, straws, forks, spoons.”

That’s some of what Josie Galloway, of Rockville, Maryland, found in the 20 minutes it took her to fill up a trash bag.

“Plastic bottles, of course, straws, pens — a lot of pens — a couple of liquor bottles, a couple masks just floating around down there,” Galloway said. “It’s hot out and you have to crawl through some of the thick brush, but then it’s just piled up because the water washes it into one specific location based on the currents of the river.”

Why are volunteers spending their weekend picking up trash?

“Because it’s better to pick it up and put it in a landfill than to have it flow into the ocean and harm our wildlife,” she said.

He and his son, Manny, were picking up ratty blankets and netting found in a more wooded stretch of the island.

“No; it’s a cumulative. If everyone thinks that it’s a massive cumulative impact and that’s why we’ve got all this stuff,” he said.

“We’re the first line of defense against the plastic and the trash from the river getting into the ocean and stuff,” said Emily Ferrence, of Severna Park.

“It kind of sucks that we’ve kind of been left with a world that’s full of plastic,” said her friend Page Judge, who signed Emily and another friend up for this event the day before. Neither were surprised by how much trash they found.

“Once you start, you’re actually looking for it, it’s really everywhere,” Ferrence said.

“When you find one, there’s like five next to it,” Judge said.