Hundreds of protesters gathered in front of the White House on Sunday afternoon to call on the international community to help those fleeing Afghanistan.
Listen now to WTOP News WTOP.com | Alexa | Google Home | WTOP App | 103.5 FM
(1/5) 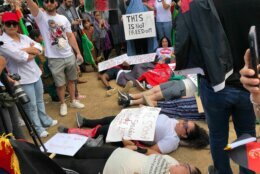 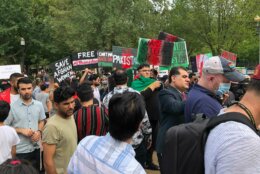 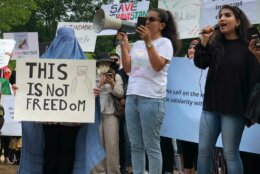 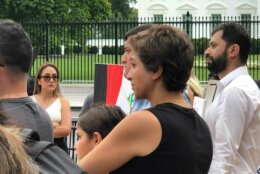 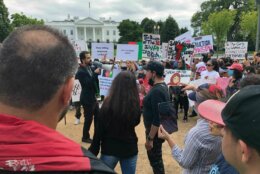 Hundreds of Afghan-Americans gathered in front of the White House on Sunday afternoon calling on the international community to help those fleeing the country after its takeover by the Taliban.

The large group of Afghan protesters held up signs saying “speak for the silenced” and “don’t let history repeat.” They were chanting “the Taliban are terrorists” and “stop killing Afghans.”

The protests followed the Taliban’s take over of Afghanistan’s capital Sunday, virtually cementing its grip on the country as President Ashraf Ghani fled for neighboring Tajikistan by plane. Footage showed Taliban militants wandering the halls of the presidential palace within hours.

She said she was at home on Sunday watching the coverage of the Taliban taking over Kabul and felt like she had to come down to the White House and show her support for Afghanistan.

“It’s the start of a dark era,” Bahari said. “We have to stop Taliban. It’s just shocking what has happened with Afghanistan.”

Afghan-Americans are gathering near the White House after the loss of Kabul to the Taliban. “Afghanistan is bleeding, don’t let history repeat itself,” they’re chanting.

One of the signs out here: “We will never forget how you sold our people and left our families to die.” pic.twitter.com/8d0PrHRimq

Sunday afternoon’s rally was organized by Afghan diaspora living in the D.C. region, many of whom were trying to keep in touch with family witnessing the Taliban’s resurgence first-hand. Many attendees expressed outrage over President Biden’s decision to pull troops out of the country, accusing the U.S. of leaving millions to an uncertain fate.

“Some of my family fled to Iran and some others are locked in their houses,” Nazila Jamshidi, an organizer of Sunday’s protest, told WTOP. “It’s so sad to see people trying to find a way to leave their homes and whatever they know, what they have worked so hard for.”

Monica Hesham was part of the protest in front of the White House because she said she wanted to bring attention to what the Taliban taking over Kabul means for the people who live there.

“We’re incredibly angry. We’re angry at the U.S., we’re angry at the world for ignoring us, for throwing us back into the hands of savages to the animals we’ve been fighting for 20 years,” Hesham said. “Thousands of Afghans killed, thousands of U.S. soldiers killed for what? Only to go back and just withdraw the troops, withdraw so mercilessly.”

Amid calls for the U.S. and the world to open their borders for Afghan refugees came frequent cries to sanction Pakistan, Afghanistan’s neighbor to the east which has served as a sanctuary for Taliban fighters. Pakistan’s embassy, located in D.C.’s Van Ness neighborhood, saw similar protests on Saturday.