The partisan divide over statehood for Washington, D.C.

Sixty-two years later and five thousand miles away, there's another battle for statehood being waged. In April the U.S. House passed a bill to grant statehood to Washington, D.C. The measure is unlikely to survive the Senate. But the issue is not about to die.
Listen now to WTOP News WTOP.com | Alexa | Google Home | WTOP App | 103.5 FM

In 1959 when Hawaii became the 50th state, it was the conclusion of a decades-long fight.

To be sure, there had been fierce political opposition. In 1958 Sen. James Eastland (D-Miss.) said, “We would have in the American Congress two senators and a representative who, in my judgement, would be influenced by the Communist Party.”

And there were questions about whether Hawaiians could ever be “real Americans.” In an interview, Ingram Stainback, who’d served as a territorial governor of Hawaii, said, “The yellow race, the Japanese, the Chinese, the Filipinos – their background is not the culture of the United States as a whole.”

But future U.S. Senator Daniel Inouye, who’d lost his right arm in World War II, had a ready response: “During the last war, World War II and Korean conflict, we lost four times more men than the average of the United States. I think we’ve been begging for statehood too long.”

Sixty-two years later and five thousand miles away, there’s another battle for statehood being waged. In April the U.S. House passed a bill to grant statehood to Washington, D.C. The measure is unlikely to survive the Senate. But the issue is not about to die.

Correspondent Mo Rocca notes that, with more than 700,000 residents, almost half of whom are African American, the District of Columbia has a bigger population than either Wyoming or Vermont. Residents there pay federal taxes – more, per capita, than any state. They can vote for president, but they have no voting representation in Congress.

Hector Rodriguez moved to Washington in 1968 after serving in the U.S. Army. “I was outraged. Completely outraged and angry,” he told Rocca. “Even when I was in the military on active duty, I could vote. And when I arrived in D.C., suddenly I realized that I didn’t have my full freedom.”

Rocca met him at one of the city’s lesser-known monuments: The D.C. War Memorial, honoring 500 of the some 6,000 district residents who’ve given their lives for their country. Rodriguez said, “I felt, as a soldier who had served my country, that I was not treated equally.” 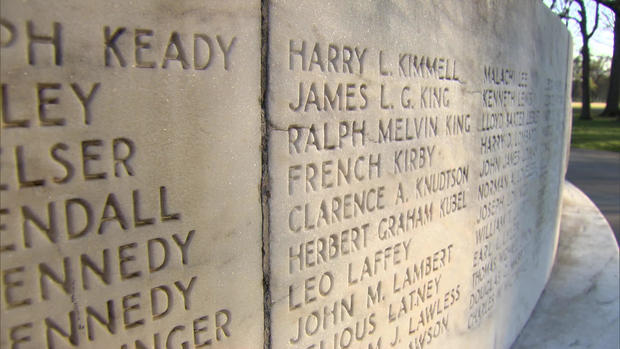 D.C. service members have given their lives to defend the rights of other Americans to vote.

No one has been slugging it out for D.C. statehood longer than Eleanor Holmes Norton. She’s represented the district as a delegate for more than 30 years, but she’s not allowed to vote on legislation. “For three generations,” she said in Congress, “my family has been denied the rights other Americans take for granted.”

In a fiery floor speech in 2007, she said, “I will not yield, sir. The District of Columbia has spent 206 years yielding to people who would deny them the vote. I yield you no ground!”

Norton told Rocca, “This is the only capital city in the world where the residents who live in their capital don’t have the same rights as everybody else in the country.”

Her grandfather was a D.C. firefighter working in a segregated unit. “My father was a civil servant; my mother was a schoolteacher in the District of Columbia public schools,” Norton said.

Rocca asked, “Did you know growing up that residents of D.C. had this unusual status?”

“I certainly knew it from the time we were children,” she replied. “Because you lived in the nation’s capital. You had no voting rights. It was as if you didn’t live in America.”

The question over D.C. voting rights stretches back to the beginnings of Washington itself. The Constitution called for the formation of a federal district, independent of any state, to serve as the nation’s capital. Land was ceded from Maryland and Virginia for the 100-square mile District on Columbia on the banks of the Potomac River. 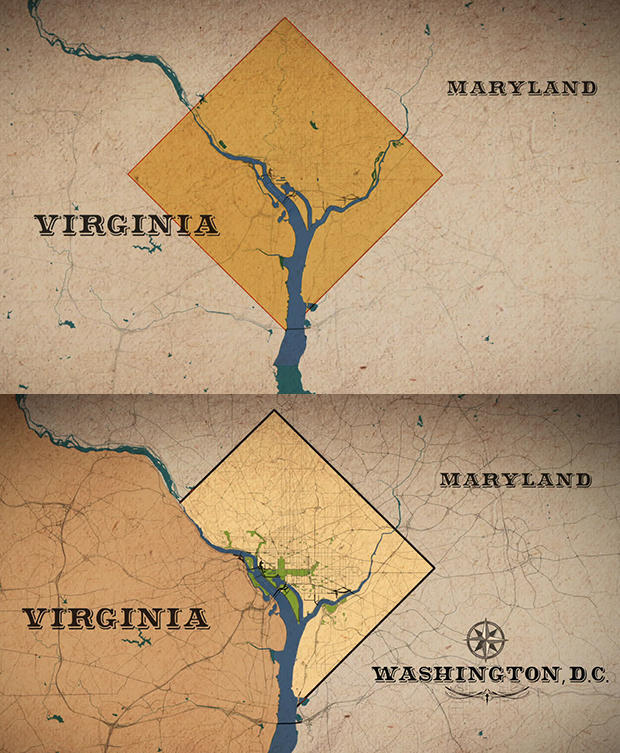 There were already people living there, in the existing towns of Georgetown and Alexandria – and soon in a brand-new one called Washington (which, by the way, is why it’s written out Washington, D.C.).

But the Constitution had nothing to say about their rights to representation.

“They had just founded a country on the principle of no taxation without representation,” said historian George Derek Musgrove, co-author of “Chocolate City,” a history of D.C. “So, they realized that they’ve got two competing principles when it comes to the District of Columbia.

Musgrove said the irony was not lost on the founding fathers: “They debate it and they debate it. And Madison finally just throws up his hands and says, ‘I know that any state that cedes the land for the district will in fact figure out how to make sure that these people are represented.’ He punts, essentially!”

In 1847 the portion of D.C. south of the Potomac “retroceded” to Virginia, in part because Alexandria’s slave traders feared that slavery would be outlawed in the district, giving the city its current shape.

It was not until the 1990s when statehood for the district became a real political movement. But at the time the city was deemed by statehood opponents as ungovernable. Mayor Marion Barry made national headlines when he was caught in an FBI sting smoking crack cocaine.

In 1993 Texas Republican Tom DeLay said, “The district, a liberal bastion of corruption and crime, has yet to come even close in this member’s eyes to deserving the awesome privilege and responsibility of statehood.”

Musgrove said, “The city was on the verge of bankruptcy. We had one of the highest murder rates in the entire country in 1993. So, these were serious problems that people used as an excuse to reject statehood legislation.”

Democrats, who in 1993 had the White House and both Houses of Congress, gave only tepid support to a D.C. statehood bill, which died a quiet death. But today, the district is a very different place. While homicides have risen over the last few years, they’re well below the early 90s peak – and the city is now on firm financial footing. 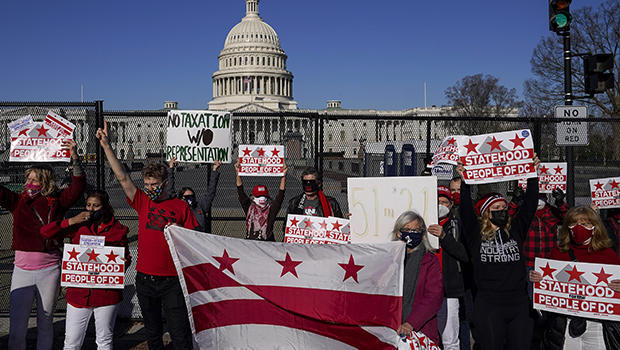 District of Columbia residents rally for statehood near the U.S. Capitol on March 22, 2021.

Thor Cheston, owner of Right Proper Brewing Company, and 22-year-old Jamal Holtz are part of a new generation of activists.

Holtz said, “This issue, for me, it’s personal. My mom did not have full healthcare; she was uninsured. So, the day where everyone was like, ‘Call your senator, reach out to your representative and tell them to vote for the Affordable Care Act,’ it was the day where I knew I was voiceless.”

But opponents of the statehood bill say, not so fast – and they’re invoking the Constitution.

Roger Pilon, a legal scholar with the Cato Institute, told Rocca, “There’s no power in Congress to turn the district into a new 51st state. The only way this can be done is through a constitutional amendment.

“It’s clear that the people in the District of Columbia want a vote,” Pilon said. “There’s only one way under current circumstances that they can do that: They will have to move to a new state.”

Rocca asked, “There are people in the district that have been here for many generations. Does that make any difference?”

Rocca asked Thor Cheston, “What do you say to the argument that, if you care this much about voting rights, move to another state?”

“I am almost speechless,” Cheston snorted. “You can’t just pick up your life. People don’t have that option.”

But the real battle is a bare-knuckled partisan one over control of a closely-divided Senate.

In 2020 92 percent of residents voted for Joe Biden. A new state would almost certainly add two more Democrats to the Senate; no surprise that opposition to statehood is almost exclusively Republican.

Rocca asked Norton, “You’ve gotta love that prospect of two more Democrats in the Senate. How much does that motivate you?”

“Well that motivates me a lot,” she replied. “We need two more Democrats in the Senate!”

While the drive for statehood may have stalled in Congress, the very people who live in the shadow of the Capitol are not about to throw in the towel. In a 2016 referendum, a record high 86 percent of D.C. residents registered their support for statehood.

According to Cheston, “Why it matters is, it’s almost as though the country is not yet complete.”

Jamal Holtz added, “It feels like disenfranchisement, that your voice does not matter. And it’s time that we make sure that our vote counts.”

Bowser slams reports she went maskless indoors: ‘If you want to report on the right-wing wingnuts, have at it’