Five of the 25 sculptures that the National Cherry Blossom Festival had designed by local artists are now up for auction.
Listen now to WTOP News WTOP.com | Alexa | Google Home | WTOP App | 103.5 FM
(1/5) 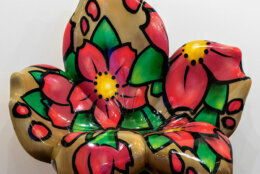 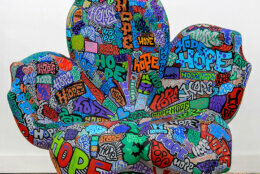 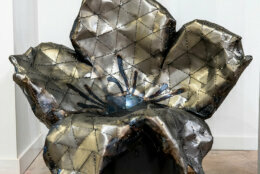 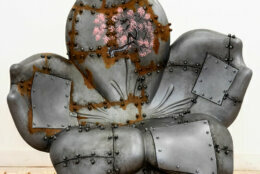 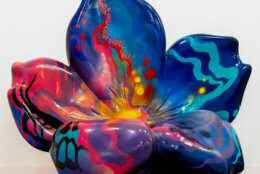 The National Cherry Blossom Festival is auctioning off five of the sculptures used to help celebrate this year’s festival, at a time when visitors were being discouraged from seeing the trees on D.C.’s National Mall.

The sculpture series was titled “Art in Bloom.” The festival commissioned 25 sculptures to be designed by local artists around the region in order to bring their own spin on spring, the cherry blossoms and District culture.

The five works on auction include those titled “Cherry Tattoo,” “Hope,” “MXY-,” “Petal to the Metal,” and “The Message.”

“The money goes to continue to support the festival’s programming that’s free and open to the public,” said Mayhew.

A portion will also go to the Trust for the National Mall’s Cherry Tree Endowment Fund: “That fund helps these trees continue to be maintained and replaced each year.”

She said the sculptures were wildly popular this year.

“The sculptures drew people to the community,” said Diana Mayhew, the president of the National Cherry Blossom Festival. “This year, we could not really furnish large gathering of crowds, so our philosophy was to bring the joy out into the community.

Mayhew said over 162,000 people accessed the blossom hunt map, and tens of thousands sent in pictures taken alongside the sculptures.

“We’re working very hard to keep (the sculptures) in the community,” Mayhew continued. “We have about 17 of them permanently placed. We’re hoping that at the end of the day, there’s going to be at least one or two in every ward of the city that stays there year-round.”

‘Not going to have 2020 happen again’: DC businesses ready for start of new indoor mask mandate