Two separate New Year’s Eve crashes in D.C. sent one person to the hospital and another person to jail.

In the first crash, which was reported at 11:12 p.m., a car went off the road and flipped over in the 2500 block of South Dakota Avenue Northeast.

Two people were trapped inside the car, and D.C. Fire and EMS crews had to use specialized tools to remove the car’s roof and free the trapped occupants.

D.C. police said one person was taken to the hospital with injuries that were not believed to be life-threatening.

Images from the crash with entrapment in the 2500 block of South Dakota Ave NE. #DCsBravest used specialized rescue tools to remove the roof of this overturned car, allowing for access to and safe removal of 2 seriously injured occupants. pic.twitter.com/DffiDcqhOj

The second crash, which involved a police chase, happened around 11:30 p.m.

Police said Jamel Regus, 23, was traveling on M Street near Minnesota Avenue in Southeast D.C. when officers tried to pull him over. In the ensuing chase, police said Regus hit three police cruisers and crashed into a Lexus, a fire hydrant and a stop sign before he was caught.

After he was arrested, officers found an unregistered firearm and, according to a police report, a black bag with a white rock-like substance.

Regus is facing numerous offenses including destruction of property, fleeing from police, and gun and drug charges. 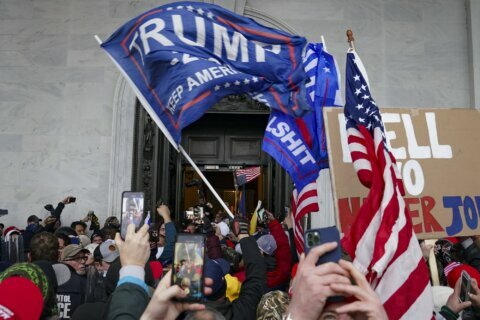