Sixteen people are without homes, a person is seriously injured and a dog died after an intentionally set fire tore through a Northeast D.C. apartment building early Friday, according to D.C. Fire and EMS.
Listen now to WTOP News WTOP.com | Alexa | Google Home | WTOP App | 103.5 FM
(1/5) 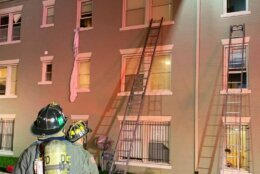 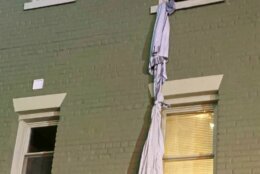 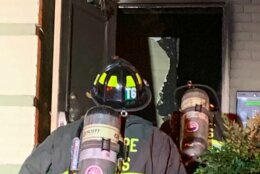 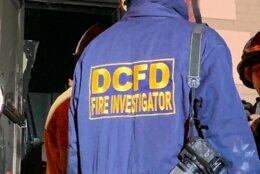 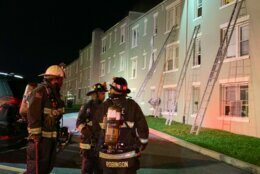 Sixteen people are without homes, a person is seriously injured and a dog died after an intentionally set fire tore through a Northeast D.C. apartment building early Friday, according to D.C. Fire and EMS.

The fire happened around 1:30 a.m. on 1st Place in the Fort Totten neighborhood, fire officials say.

One person has serious injuries after jumping from a third-story window, the fire department said.

No other injuries were reported, and the fire department said it rescued several people from the third floor.

“There were a number of people in distress, at windows, seeking assistance,” Maggiolo said.

Arriving firefighters used ladders to get to those trapped out of harm’s way.

“We immediately went into a rescue mode, placing portable ladders to several windows and brought several people down,” Maggiolo said.

The basement fire was knocked down quickly by fire crews, but a dog died in the flames.

An accelerant sniffing canine was on the scene early Friday to assist in determining the cause.

A map of the location of the fire is below:

WTOP’s Valerie Bonk and Mike Murillo contributed to this story.