D.C. police released video footage Thursday in the death of a 20-year-old man after a moped crash that has sparked days of protests in the District. Here's what to know.
Listen now to WTOP News WTOP.com | Alexa | Google Home | WTOP App | 103.5 FM

D.C. police released video footage Thursday in the death of a 20-year-old man after a moped crash that has sparked days of protests in the District.

“I want to acknowledge the pain the family of Karon Hylton is feeling right now,” D.C. Mayor Muriel Bowser said at a news conference.

She also said the city wants to “clear up” questions about the incident between a D.C. police cruiser and Hylton’s moped, adding that they’re releasing body cam footage because it is of “great public interest.” According to authorities, Hylton’s moped and the cruiser did not collide.

“The footage shows that the MPD car does not collide with Karon,” Bowser said. “That said, we are using the footage as part of an investigation that will decide whether MPD policies were broken.”

Hylton, a D.C. native, died in a hospital after a motorist struck him as he drove a moped in Brightwood Park last Friday night.

Officers had reportedly pursued Hylton because he was not wearing a helmet, leading Hylton’s family to accuse D.C. police of precipitating the events that led to his death.

Warning: The following video is the “community briefing” version that D.C. police edited and released. Some viewers may find the footage distressing or disturbing.

Police Chief Peter Newsham said no “contraband” was found after Hylton’s death and did not provide an explanation as to why the chase happened.

“We don’t know what the officers had in their mind at the time of the stop,” Newsham said.

The police chief said four officers involved have been put on leave, and their police powers have been revoked pending the investigation.

Newsham added that the case will be handed over to the U.S. Attorney’s office for review.

At issue is an interpretation of what constitutes a “chase” and whether police were justified in pursuing Hylton. City police regulations forbid high-speed pursuits over minor traffic violations. Police have said officers tried to stop Hylton because he was riding his moped on the sidewalk without a helmet.

Newsham said his officers are trained not to chase after a traffic violation suspect unless they believe a person is involved in serous criminal behavior.

“If you make a determination that the person is fleeing, as a member of this department if you don’t have something very serious in nature, you need to discontinue the attempt to stop that vehicle,” he said. Otherwise, “it becomes an unauthorized pursuit.”

“We have very clear policies about no chasing,” said Bowser, adding that investigators “will decide whether MPD procedures were broken.”

Protests over Hylton’s death have been happening for two days in D.C. A small group congregated again Thursday.

Wednesday night’s demonstrations began with a candlelight vigil for Hylton in Brightwood Park. Hours later, it ended in a dispersal of over a hundred protesters, with police deploying concussion grenades and pepper spray for a second night in a push to clear Georgia Avenue.

Hylton’s mother led a small vigil at 7th and Kennedy streets, the site of the crash that killed him. It concluded with a march to the police department’s Fourth District station on Georgia Avenue — the site of protests Tuesday night, which saw one arrest and the use of crowd control munitions after windows were shattered and police vehicles damaged.

Protesters were met with a heavy police presence at the station. Officers with batons, shields and helmets stood in formation below the building’s Georgia Avenue entrance while protesters heckled and taunted them for at least an hour on Wednesday evening.

At about 9 p.m., WTOP’s Alejandro Alvarez reported a firework went off at ground level near police lines at the station entrance. Police surged forward, splintering the crowd into smaller groups that fled south on Georgia Avenue.

D.C. Police Union Chairman Gregg Pemberton released a statement Thursday night about the protests outside the Fourth District station. He accused the D.C. government, and specifically named Ward 6 Council member Charles Allen, of preventing officers from being able to protect themselves.

“These new policies not only put our members at risk, they also endanger our communities by pulling the few police we have out of patrol,” Pemberton said.

The temporary legislation limits police from using riot gear, among others, unless there is a serious threat of injury or death.

Allen, in response to Pemberton’s statement, told WTOP, “It’s a sad day for our city when the leadership of those sworn to protect us try to trade on a young man’s death for headlines.”

Pemberton called Allen’s comment “preposterous,” and said the union and many other experts have warned him and the council about the impact of these policies, which Allen has ignored.

“He doesn’t know the first thing about law enforcement He’s now advanced all of these crazy, ridiculous, radical policies on the city,” which Pemberton claims is resulting in an increase in crimes.

Newsham said eight people were arrested Wednesday night and 14 officers were injured, most from being struck by fireworks.

Pemberton called the attack on officers “alarming” and laid the blame on the D.C. Council and their new polices on how to handle these kinds of situations.

As a result, Pemberton said officers are getting hit by rocks and fireworks, and they’re not able to defend themselves. He added that police are also not able to go “out into these groups and making these arrests and getting them off the street.”

Pemberton said the union is looking into when the order to put helmets on came down, as he said he is hearing from members that they were denied the ability to don them, which he believes resulted in injuries.

“Now, the reason you might see some on, some off, of maybe some officers went ahead and put them on just for fear of their own safety, maybe risking the administrative sanctions that could come with that,” Pemberton said. 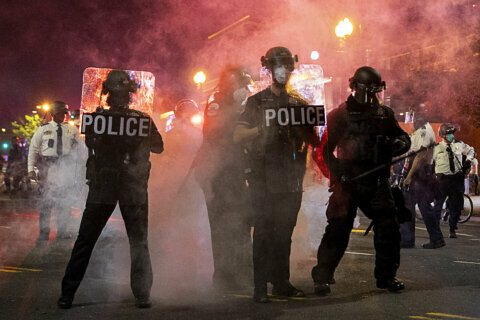 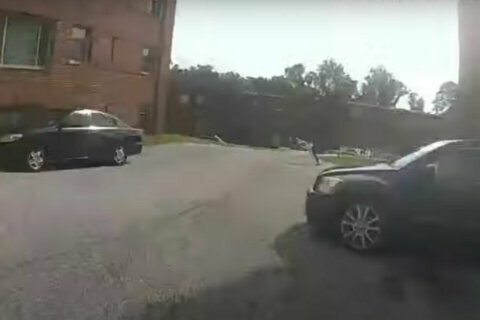