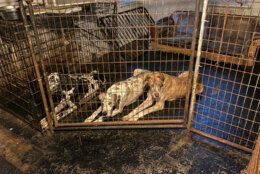 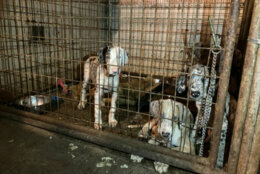 An investigation into suspected animal cruelty led to the rescue of 42 animals, including 36 dogs, in Southeast D.C. on Wednesday, according to the Humane Rescue Alliance.

Six rabbits and 36 dogs, including 33 Great Danes, were discovered when Humane Law Enforcement officers arrived with the Humane Rescue Alliance and executed a search and seizure warrant in the 2900 block of Branch Avenue in Southeast D.C., the group said.

Officers found the animals being housed in “extremely unsafe and unsanitary conditions,” the HRA said in a news release.

The group said that “in many instances, multiple Great Danes were confined to one small cage, forced to live amongst their own waste and sleep on a concrete floor. Blood and feces covered the walls. The animals did not have access to food or water. The smell of ammonia and feces overwhelmed the rescuers.”

The Humane Rescue Alliance said officers uncovered evidence “relating to the sale of animals and at least one of the Great Danes is suspected to be pregnant. They also discovered the remains of several puppies in a mini refrigerator.”

“I am relieved they are now safe and in the hands of people who will provide them with the love and proper care they need and deserve,” Schindler said.

The case remains under investigation, according to the Humane Rescue Alliance, which said the animals are now in its care.

The rescued animals “will be thoroughly examined by a veterinarian and receive any necessary medical and behavioral treatment,” the group said.

Donations to help care for the animals can be made online.

Humane Rescue Alliance said the rescue was made in response to an anonymous tip.