Ready for the November election? DC officials say they are

“We are expecting record-shattering turnout for this general election,” said Board of Elections Chairman Michael Bennett, and he added that his department is ready.
Listen now to WTOP News WTOP.com | Alexa | Google Home | WTOP App | 103.5 FM

After drawing criticism for problems such as long lines at polls and missing mail-in ballots during the June primary, the D.C. Board of Elections said it hopes to avoid those issues this fall.

“We are expecting record-shattering turnout for this general election,” said Board of Elections Chairman Michael Bennett during a news conference Thursday at Capital One Arena, which will serve as one of the city’s early voting centers this fall.

D.C. residents can go there to register,and cast their vote. It’s also one of 50 places they can drop off their absentee ballots this year.

Early voting starts in D.C. on Oct. 27, but by then, every registered voter will have received an absentee ballot, Bennett said.

“Voters should start expecting to receive ballots around Oct. 5 or 6 or so,” he said.

Capital One Arena will be what Bennett called a “super vote center” for D.C. residents.

He said 20 voting machines will be set up, and “We’ll be able to process people very quickly.”

Bennett added that voting will be spread out, in line with physical distancing needs, and touted the planned effectiveness of the process.

Bennett also said about 4,000 poll workers will be needed this year, but that D.C. already has applications from about 3,000 to 3,500 people interested in working this fall. He said about 1,500 people have already been trained for the election.

But there’s a reason absentee ballots are being sent to everyone, and Bennett said that if residents are going to mail ballots back, they should do so quickly.

“We’re really encouraging people to either drop their ballot in a drop box, or come by a vote center such as Capital One Arena and drop it off,” he said.

Joining Bennett at the news conference was Washington Wizards guard Bradley Beal, who has become more active in social causes in recent months. Beal admitted he has never voted before, but that will change this year. He lives in Maryland, but he said he’ll be voting absentee.

“I don’t necessarily see myself or consider myself an activist, but I feel like I have a platform, and I’m going to utilize it to the best of my ability,” said Beal, who called the November election “the most important time for us all to vote.”

“The numbers are going to be crazy … this voting center serves as your voice to be heard for the rest of the world. We see this as an opportunity for no excuses to be had,” Beal said. 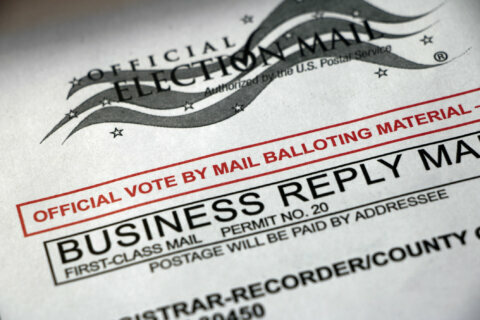 Every DC voter to get absentee ballot in mail? Elections board plans changes for November