D.C. Mayor Muriel Bowser has refined the scope of a working group’s assignment to decide what actions should be taken on renaming or contextualizing parks, streets, schools, buildings and monuments after the group’s initial report sparked criticism from the White House and members of Congress.

The group DCFACES, which was assembled in July, recommended removing, relocating or adding historical context to buildings and monuments named for figures such as Thomas Jefferson, Benjamin Franklin and Andrew Jackson.

One page of the group’s recommendations focused on monuments that are federally-owned, and thus fall outside the city’s jurisdiction to modify.

“As long as President Trump is in the White House, the mayor’s irresponsible recommendations will go absolutely nowhere … she ought to be ashamed for even suggesting them for consideration,” according to the statement from McEnany.

Secretary of the Interior David Bernhardt took to Twitter to express his displeasure at the recommendations.

Not on my watch. Never going to happen. https://t.co/WdSQx3ZCes pic.twitter.com/xHKekThBAA

Republican members of Congress also expressed outrage over the recommendations, though many misrepresented the suggestions as being about removing the statues and monuments entirely instead of adding historical context to figures who were slaveholders.

In a statement to WTOP’s Megan Cloherty, Bowser’s office said:

Interesting to see the White House comment on an intragovernmental report about how to recognize all sides of our history. We’d expect the White House to help keep D.C. safe by holding the U.S. Attorney for D.C. accountable for prosecuting violent crime. Mayor Bowser has asked the DCFACES Working Group to clarify and refine their recommendations to focus on local D.C., so no one attempts to confuse the working group’s focus on contextualizing not removing important monuments and memorials in D.C.

The report eventually removed the recommendations for Bowser to use her position on the National Capital Memorial Advisory Commission to suggest the removal or contextualizing of federally-owned monuments and statues.

An aide for Bowser told The Washington Post that the mayor had asked the group to focus on “local D.C.” instead of federally-owned property to avoid people mistakenly believing that the recommendation was to remove the monuments instead of adding historical context.

Much of the DCFACES recommendations came from public input.

WTOP’s Megan Cloherty and Jack Pointer contributed to this report. 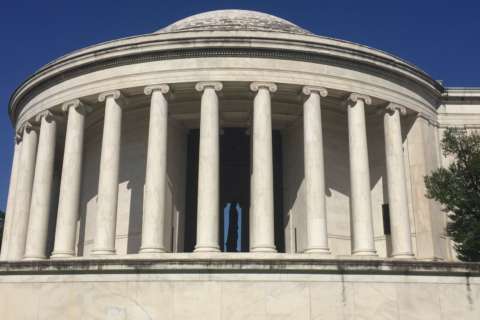 Report to mayor singles out DC landmarks with a racist legacy