The organizers of the HBCU March of the Generations will honor the life of Chadwick Boseman by holding a moment of silence ahead of a Saturday demonstration.
Listen now to WTOP News WTOP.com | Alexa | Google Home | WTOP App | 103.5 FM
(1/3) 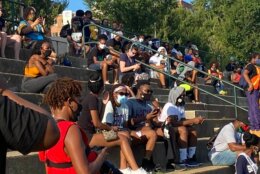 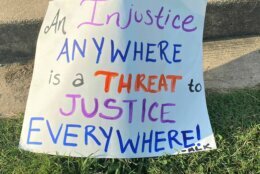 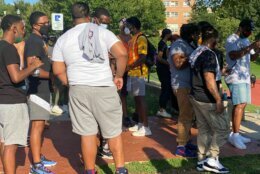 The organizers of the HBCU March of the Generations will honor the life and legacy of Chadwick Boseman by holding a moment of silence ahead of a Saturday demonstration.

Boseman, who died Friday after a 4-year battle with colon cancer, was an alumni of Howard University and often spoke fondly of his alma mater.

Student leaders of 13 Historically Black Colleges and Universities (HBCU) were originally set to March at 1 p.m., but inclement weather due to remnants of Hurricane Laura pushed the march into later in the day.

Organizers looked to continue the momentum of the commemoration of the 57th anniversary of the March on Washington, where thousands descended on the nation’s capitol to demanded civil rights and economic opportunity.

Aniyah Vines, a junior political science and criminology double major at Howard University and lead organizer of the HBCU March of the Generations, said they stand in solidarity with civil rights icons that have come before them.

“We’re paying homage to those who have sacrificed their lives and been put on the front lines, and making sure we can continue that fight and continue to make that good trouble,” said Vines, echoing the words of the late civil rights icon John Lewis.

DeAndre Gates, a graduate of Jackson State University and one of the coordinators of the march said he not only looks to the civil rights pioneers of the past, but those of today’s movements as well.

“Those folks have some really great knowledge, really great insight, that are imparting into us young adults and those are the leaders of today that really are pushing this movement forward,” Gates said.

Gates said he got in contact with Vines through The Live Movement, which Vines founded with the notion that the current generation must live for those who have sacrificed their lives.

Gates put Vines in touch with Cierra Jackson, the current Miss District of Columbia and a 2014 graduate of Spelman College in Atlanta, Georgia, to help co-organized the march.

Jackson said she wants the HBCU March of the Generations to be all inclusive.

“We think that everyone needs to be there. No great march or movement has ever existed without allies of other communities so we welcome every community to come and march with us,” she said.

The organizers said they want to focus their activism into policy action.

They are advocating for support for low income students through a Pell Grant increase, support for black colleges, a high school-to-HBCU pipeline, as well as incorporating African American studies into public schools across the country.

“We still have work to do, and we are taking on that responsibility to make sure that work gets done,” Vines said.

The rally will begin at Banneker Recreation Center in Northwest and end at the National Museum of African American History and Culture.

275 charged so far: What we know about the Capitol riot arrests