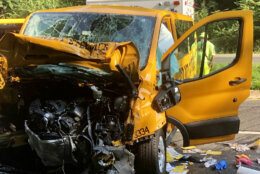 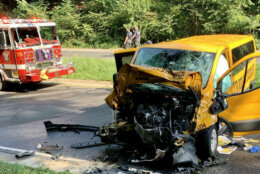 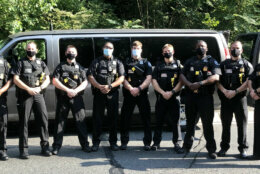 Police are looking for information about a vehicle that police said played a part in a deadly Suitland Parkway crash but sped from the scene Tuesday morning.

The crash killed a Lothian woman and injured four others.

It shut down part of Suitland Parkway in Southeast D.C. Tuesday morning and part of the afternoon.

The crash was reported at 8:48 a.m. Tuesday on Suitland Parkway between Stanton Road and Alabama Avenue, according to D.C. police.

Photos posted by the D.C. Fire and EMS Department showed the crash involved a Stanley Steemer van and an SUV. Officials said one of the vehicles caught fire in the crash.

Police said that a Chevy Traverse traveling inbound on Suitland Parkway was struck from behind by a driver in a dark-colored vehicle that was going at a high rate of speed and trying to pass the SUV.

The driver of the Chevy lost control and crossed the median onto the outbound lanes, striking a van head on, police said.

The driver of the dark-colored striking vehicle kept going inbound, sideswiping two other vehicles in fleeing the scene.

A D.C. police spokeswoman confirmed the death of one person in the crash. Sherry Knight, 42, of Lothian, Maryland, was the front-seat passenger of the Chevy. Knight was taken to the hospital, where she was pronounced dead.

The driver and the rear passenger of the Chevy, and two occupants of the van, were also taken to the hospital with injuries that are not life-threatening, a D.C. police news release said.

The drivers of the two other vehicles that were sideswiped by the first striking vehicle were treated and released on the scene.

Police are looking for information on the dark-colored, possibly black vehicle. Anyone with information on what happened should call D.C. police at 202-727-9099.

A van carrying Secret Service recruit graduates returning from an assignment was passing by when the officers spotted the crash crash and pulled over to help. “The officers pulled over, immediately removed two individuals from the vehicles, and began assessing injuries and rendering critical interim aid,” before rescue crews arrived, a statement from a Secret Service spokeswoman said.

D.C. Fire and EMS posted a photo of nine Secret Service officers near the crash site.

The crash led to the closure all lanes of Suitland Parkway between Stanton Road and Alabama Avenue for a few hours Tuesday. Both the inbound and outbound lanes had reopened by shortly after 2 p.m., according to the WTOP Traffic Center.

WTOP’s Adisa Hargett-Robinson and Abigail Constantino contributed to this report.