A 17-year-old is dead  — one of at least 21 people, including an off-duty D.C. police officer, who were shot during a large public gathering in Southeast early Sunday morning, according to police. Here's what to know.
Listen now to WTOP News WTOP.com | Alexa | Google Home | WTOP App | 103.5 FM
(1/4) 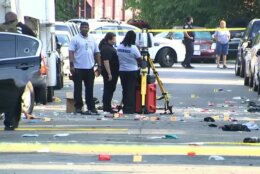 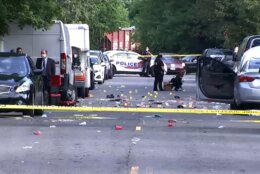 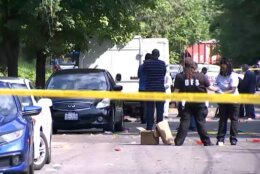 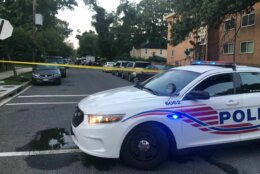 A 17-year-old is dead  — one of at least 21 people, including an off-duty D.C. police officer, who was shot during a large public gathering in Southeast early Sunday morning, according to police.

D.C. police said shots were fired around 1 a.m. Sunday on the 3300 block of Dubois Place SE, in a residential neighborhood located between Fort Circle Park and the northbound Anacostia Freeway in Ward 7.

At least nine people were transported to various nearby hospitals for treatment, a police spokesman confirmed.

Shooting in SE near the corner of Dubois Place and 33rd St. leaves atleast one dead, nine people taken to nearby hospitals. Investigators still on the scene, many bullet casings left behind @WTOP pic.twitter.com/d6Fd0fQy7s

“He had not lived life and for him to have a 1-year-old … they just took my cousin away. This stuff has to stop,” said Brown.

The 17-year-old father lived on Minnesota Avenue with his grandmother, nearby the scene of the party where he was killed.

“That baby don’t have no father no more. And he was a baby himself, he was only 17.”

D.C. Police Chief Peter Newsham said the off-duty officer who was shot is assigned to the 1st District and has been with the police department for a year. He said she is “fighting for her life.”

He added that “the rest of the gunshot wounds, as far as we know, are non-life-threatening.”

The off-duty officer was taken by fellow officers to a hospital, Newsham said.

“She’s struggling for her life right now,” he said. He added that “the rest of the gunshot wounds, as far as we know, are non-life-threatening.”

Of the others shot, all were adults except for another 17-year-old, according to Newsham.

“What happened was it was some kind of dispute. Multiple weapons were produced and multiple shots were fired,” said Newsham during a news conference Sunday with D.C. Mayor Muriel Bowser.

He said there were at least three gunmen, who used handguns, shooting from three spots simultaneously. No motive was offered.

“We had a lot of people that were in a dangerous situation last night and sadly several people who have no regard for human life opened fire,” said Mayor Bowser.

There may have been hundreds of attendees at the gathering despite city restrictions during the coronavirus pandemic on such large gatherings, Newsham said.

No permit was issued for the event, according to Newsham.

“I saw a young lady, she got shot in the leg. A young man, he was leaning over his car … it sounded like machine guns” said Nelson Bostic, who lives in the neighborhood.

He told WTOP it was birthday party.

“You had DJs, everybody was down there. It was more women than men,” said Bostic.

“Next thing you know, it was like Beirut out here. It sounded like machine guns and everything else that was going on out here.”

“People laying on the ground. People ducking under cars and stuff like that,” said Bostic, who took cover under his bed, “it was terrible.”

“There were a lot of people in the streets when I got home around 10 p.m.; this is usually a very quiet street,” another neighbor told WTOP, as she watched police investigate the shooting after returning home from work. She declined to give her name.

“It was terrible. You had quite a few people laying on the ground, people ducking under cars.” Resident who heard shots ring out here along 33rd st and Dubois Pl. SE lastnight says it happened at a party that happens every year but has never turned violent @WTOP pic.twitter.com/8DwtLQevF9

In a statement Monday, former District mayor and current Ward 7 councilman Vincent Gray urged accountability for both the perpetrators of the shooting and the conveners of the mid-pandemic mass gathering where it took place.

“It is imperative that people are held accountable for wanton acts of violence and irresponsibility that not only threaten lives but result in people being maimed and left severely incapacitated,” Gray said.

“This kind of lawlessness must stop, and I look forward to working with our civic and community leaders to put an end to this reckless behavior and to return order to our communities and neighborhoods.”

WTOP’s Alejandro Alvarez and Melissa Howell contributed to this report.