Independence Day protests sprout up around DC, clash with celebrations

A variety of different protests are sprouting up throughout D.C. during the Fourth of July holiday, with some disrupting traffic along major roadways.
Listen now to WTOP News WTOP.com | Alexa | Google Home | WTOP App | 103.5 FM
(1/9) 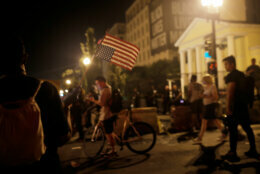 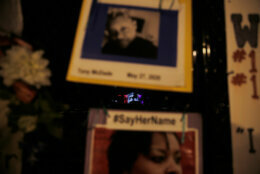 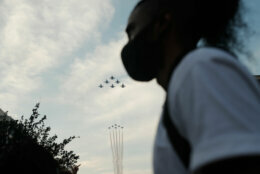 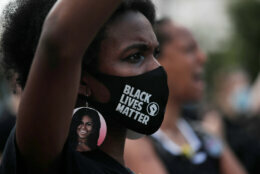 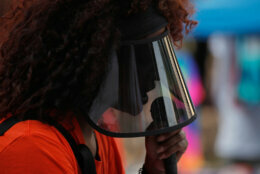 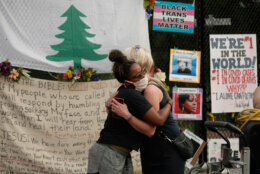 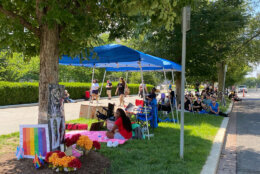 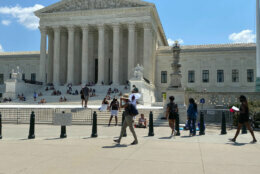 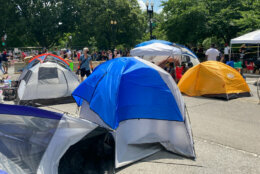 During the 244th birthday of America, amid grand displays of patriotism on the National Mall and at the White House, largely peaceful protests converged upon the festivities as a reminder of racial injustice in the country.

While the majority of the demonstrations were peaceful and without incident, an American flag burned outside Lafayette Square before the start of the annual fireworks display.

Members of the Revolutionist Communist Party, or RevCom, attempted to burn a few small American flags in that area just after 8 p.m., before they were confronted by other protesters, WTOP’s Alejandro Alvarez reported.

“This is what they want, don’t give it to them,” a demonstrator who intervened said. But RevCom ignited a larger flag minutes after arguments with other protesters who disagreed with the flag burning. As the flag burned, protesters chanted “slavery, genocide and war” and “America was never great.”

After arguments with protesters who disagreed with their action, RevCom have managed to get a larger flag burning outside the gated Lafayette Square to chants of “slavery, genocide and war—America was never great.” Within seconds, it’s reduced to ash. pic.twitter.com/r7VItDanpw

Just ahead of the 9 p.m. fireworks show, protesters marched from Black Lives Matter Plaza to the National Mall and wove between the hundreds of people sitting on the grass awaiting the show. Those protesting and celebrating came face to face when demonstrators shredded Trump flags on the mall during a confrontation, Alvarez reported.

Riot police occupied the Mall as the fireworks began. Over the booming pyrotechnics, protesters yelled “Black Lives Matter” while they marched on the Mall near the Washington Monument.

Riot police confronting protesters on the National Mall — fully geared up with batons, shields and all — while fireworks boom in the sky with patriotic music blaring might be the ultimate snapshot of where we are as a country right now. pic.twitter.com/Gli5fS1bwZ

Protesters and trump supporters clashed with each out with verbal confrontations, leading to tense moments before being separated by U.S. Park Police. Some of the protesters returned to Black Lives Matter Plaza to congregate. Police cleared several people off the street.

It continues to be night after night of tense unpredictable moments here near Black Lives Matter Plaza where everyone is wandering around wondering what is touching it all off pic.twitter.com/TwXGUMpuuR

Earlier in the day, a tent occupation was cleared by police at the epicenter of protests in D.C. near Black Lives Matter Plaza. Alvarez reported that around noon police moved in to try and clear the area at 16th Street and H Street.

I just got to Black Lives Matter plaza where police have swept the street clear of a small encampment protesters had pitched last night, dubbed Occupy H Street.

They’ve relocated within the plaza. Volunteers tell me there were no arrests, pepper spray wasn’t used. pic.twitter.com/SCB06zLKVb

The encampment has been dubbed “Occupy H Street” according to Alvarez, who added that no one was arrested or pepper sprayed as they were moved roughly a block away.

Ahead of the ‘Salute to America’ celebration on the National Mall — featuring a speech from the President, fireworks and a flyover — hundreds took to the streets early Saturday afternoon to march. Alvarez followed marchers through the Columbia Heights and Adams Morgan neighborhoods as the group chanted “no justice, no peace” and “fire fire, gentrifier.” Alvarez reported the march traveled through some of the District’s most heavily gentrified neighborhoods and were bringing attention to the issue of gentrification.

#NOW: What’s bound to be an active day of protests against police violence and racism is underway in D.C. with hundreds marching through some of the city’s most heavily gentrified neighborhoods.

McMillan spoke to the group of protesters through a megaphone in the Columbia heights area, and led protesters continued to march through Adams Morgan. Eventually, Alvarez said the group happened to run into Rahul Dubey, who sheltered protesters in his home during a June 1 clash between protesters and police on Swann Street.

The group gathered around Dubey and chanted “you’re a hero.”

Other protests sprouted up throughout the District during the holiday, with some disrupting traffic along major roadways.

WTOP’s Rob Stallworth reported that all traffic on the 14th Street Bridge was jammed due to peaceful protesters on the eastbound and westbound sides of Interstate 395, between the 14th Street and 11th Street bridges, as of 1:45 p.m. Saturday. About two hours later, demonstrators cleared the road and all lanes of traffic were opened.

Stallworth also reported that the southbound 3rd Street tunnel from New York Avenue was also closed due to demonstrations, with the westbound ramps to Maine Avenue blocked off as a result.

Earlier Saturday afternoon in the District, a sit in organized by law students from Howard University and University of D.C.

The goal of the demonstration, according to organizers who spoke with WTOP’s Andrea Cambron, was to bring attention to the black women and black transgender women who they said are killed at the same rates as black men.

Hutchins urged those at the demonstration to not feed into a sense of hopelessness about their cause.

She said their work won’t be finished until the color of someone’s skin does not define a person’s outcomes in the criminal justice system, or until black and brown children no longer go to schools that are under resourced and neighborhoods are desegregated.

This is a developing story, stay with WTOP for the latest.